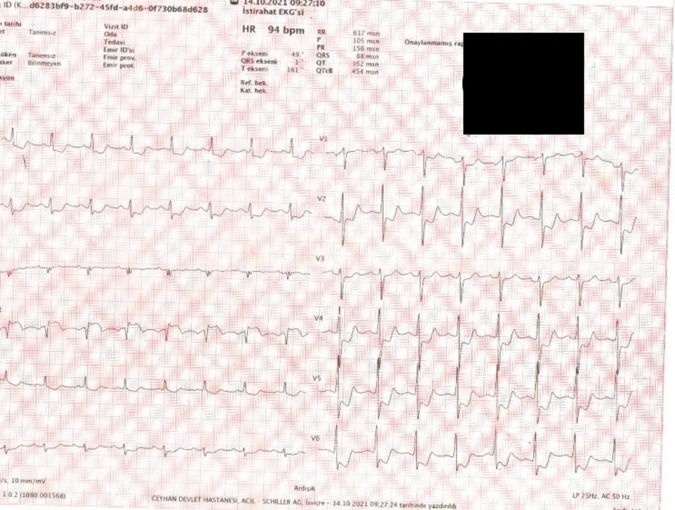 Kounis syndrome (KS) is an acute coronary syndrome including coronary spasm, acute myocardial infarction, and stent thrombosis preceded by an anaphylactic, anaphylactoid, allergic, or hypersensitivity injury. In this case presentation, we discussed Type I and Type II KS. Case 1 was a 72-y-old man who presented to the emergency department with allergic symptoms and chest pain that developed after multiple bee stings. Electrocardiography showed ST depression in the lateral leads. Case 2 was a 42-y-old woman who presented to the emergency department with complaints of chest pain, dizziness, and presyncope that developed after multiple bee stings. Mobitz Type II Block with right bundle branch block was observed in 42 beats·min-1 in the electrocardiography. Both patients were first treated for allergic reaction. Although early percutaneous coronary intervention was performed for graft thrombosis in Case 1, a permanent pacemaker was inserted in Case 2. The patients were discharged without any complications. Increasing physician awareness towards the existence of KS can prevent fatal outcomes with early diagnosis and treatment.

Defined as the emergence of acute coronary syndrome in an allergic hypersensitivity or anaphylactic state, Kounis syndrome (KS) is a life-threatening medical emergency. It is thought that platelet activation, which leads to the degranulation of mast cells and releasing of multiple inflammatory mediators, makes arterial circulation susceptible to acute cardiac events. Vasospastic allergic angina (Type I), allergic myocardial infarction (Type II), and stent thrombosis forming an obstructive thrombus caused by eosinophils and/or mast cells (Type III) are the 3 variants of this syndrome that have been reported so far.
1
Kounis syndrome: an update on epidemiology, pathogenesis, diagnosis and therapeutic management.
Clin Chem Lab Med. 2016; 54: 1545-1559
Various causes have been found to trigger KS, and their number is increasing rapidly. Various types of food, drugs, environmental exposures, and insect bites are the most frequently reported causes.
1
Kounis syndrome: an update on epidemiology, pathogenesis, diagnosis and therapeutic management.
Clin Chem Lab Med. 2016; 54: 1545-1559
Bee venom is also one of the triggers. Although cardiovascular events after bee sting are mostly described as related to anaphylactic shock, some reports highlight that bee venom causes myocardial infarction with a direct effect on the heart and coronary circulation.
2
Myocardial infarction following bee sting.
J Assoc Physicians India. 2014; 62: 738-740
,
3
Kounis syndrome: a stinging case of ST-elevation myocardial infarction.
Heart Lung Circ. 2015; 24: e48-e50
,
4
Acute myocardial infarction following honeybee sting.
BMJ Case Rep. 2014; 2014bcr2014203832
In this study, we present patients with Type I and Type II KS with electrocardiography (ECG) changes and heart block after multiple bee stings.

A 72-y-old man was admitted to the emergency service of another hospital with allergic symptoms after multiple bee stings. He had a history of coronary artery bypass grafting in 2016 and surveillance angiography in 2019, which found the circumflex artery was 95% occluded. A bare metal stent was applied to the circumflex artery in the same session. Since the stent insertion in 2019, the patient had been using daily ramipril (5 mg), acetylsalicylic acid (100 mg), metoprolol (50 mg), clopidogrel (75 mg), and atorvastatin (40 mg), and his coronary artery disease had been stable for the last 2 y. The patient had no known allergic disease.
After the patient’s admission following the multiple bee stings, intravenous prednisolone, diphenhydramine, and ranitidine were administered to the patient in the emergency service for widespread urticarial rash and itching that developed from multiple bee stings.
After the allergic treatment, rashes and itching improved. Chest pain radiating to the left arm started approximately 1 h after the bee sting. Thereupon, the patient was transferred by ambulance to our emergency department for further examination and treatment. Vital signs at the time of arrival to our emergency department were as follows: temperature 36.2°C, blood pressure 145/80 mm Hg, heart rate 85 beats·min-1, respiratory rate 21 breaths·min-1, and SaO2 98% (in room air). In physical examination, there was diffuse hyperemia in the body. There was no urticarial rash or uvular edema, and lung sounds were normal. An ECG showed ST segment depression in the lateral leads. The burning sensation in his chest persisted. The high sensitivity troponin I value taken approximately 2 h after the bee sting was 1544 ng·L−1 (normal range 0–16 ng·L−1) and CKMB value was 27.5 μg·L−1 (normal range 0.6–6.3 μg·L−1). Other laboratory parameters (metabolic panel and blood counts) were normal.
The patient was hospitalized in the coronary intensive care unit and coronary angiography was performed. Coronary angiography revealed thrombosis in the bypass graft (aorta–saphenous vein graft–obtrusive marginal arteries). Percutaneous coronary intervention was successfully performed in the same session as coronary angiography. The patient was diagnosed with Type II KS. The patient was followed in the hospital for 4 d and was discharged without any complications.

A 42-y-old woman with no known disease other than asthma and hypertension was brought to our emergency department by ambulance with complaints of chest pain in her left arm, dizziness, and presyncope that developed within 1 h after multiple bee stings. The patient had no known allergic disease. The patient had no symptoms until the bee sting and was performing normal activities. Her vital signs at the time of admission to the emergency service were as follows: temperature 36.4°C, blood pressure 120/80 mm Hg, heart rate 42 beats·min-1, respiratory rate 21 breaths·min-1, and SaO2 98% (in room air). In physical examination, there was widespread hyperemia in the body. Urticarial plaques and uvula edema were absent, and lung sounds were normal. Intravenous prednisolone and diphenhydramine were administered to the patient in the emergency service for the allergic reaction. Mobitz Type II Block with right bundle branch block was observed in 42 beats·min-1 in the ECG. The high sensitivity troponin I value taken approximately 90 min after the bee sting was 941 ng·L−1 (normal range 0–16 ng·L−1) and CKMB value was 6.9 μg·L−1 (normal range 0.6–6.3 μg·L−1). Other laboratory parameters (metabolic panel and blood counts) were normal. The patient was evaluated as non-ST elevation myocardial infarction. The patient, to whom a transcutaneous pacemaker was implanted in the first intervention in the emergency service for symptomatic bradycardia, was transferred to the coronary intensive care unit. During the coronary intensive care follow-ups, the patient continued to have symptomatic bradycardia. A permanent pacemaker was implanted approximately 24 h later, and coronary angiography was performed in the same session. The patient, whose angiography was reported as normal coronary and in whom Type I KS was considered, was discharged without any complications after 5 d of follow-up and treatment.