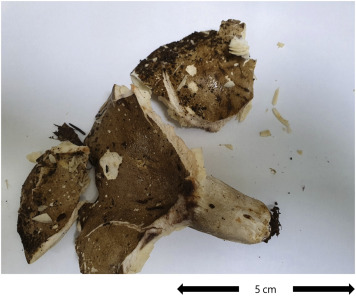 Mushroom poisoning and subsequently the number of patients visiting emergency rooms are increasing, as well as the proportion of fatal mushroom poisonings. Myocytic mushroom poisoning is one of the new clinical classifications. This report documents the course of a family with Russula subnigricans poisoning complicated by severe rhabdomyolysis, including a case that was misdiagnosed as myocardial infarction. A 64-y-old man visited our hospital with symptoms including substernal chest discomfort, nausea, vomiting, and myalgia, lasting for 12 h. His laboratory tests showed elevated serum high-sensitive troponin I. He was diagnosed with non-ST segment elevation myocardial infarction. After that, 2 family members who ate mushrooms together were transferred from a local emergency room with the diagnosis of rhabdomyolysis. Consequently, rhabdomyolysis due to mushroom poisoning was diagnosed. They were hospitalized in the intensive care unit. After admission, conservative management, including primary fluid resuscitation, was performed, and the patients were discharged without complications. R subnigricans poisoning was revealed after investigation and should be considered in mushroom poisoning with rhabdomyolysis. Early recognition and intensive supportive care are important for mushroom poisoning patients.

Four people from 1 family, including 2 men and 2 women, had dinner including wild mushrooms that had been picked from the forest of Yangsan-si, Gyeongsangnam-do, Republic of Korea in August, late summer, 2019.
A 64-y-old man (Patient 1) visited the emergency department of Pusan National University Yangsan Hospital with symptoms including substernal chest discomfort, nausea, vomiting, and myalgia, lasting for 12 h. He had a medical history significant for hypertension, diabetes, and coronary artery disease. His vital signs were stable (Table 1). Electrocardiogram (ECG) showed sinus rhythm and right bundle branch block, and there was no difference from the ECG obtained 2 d prior in the outpatient department. His laboratory tests showed elevated serum high-sensitive troponin I (hs-TnI) and creatinine kinase myocardial band (CK-MB) (Table 1). His symptoms and findings were consistent with the diagnosis of non-ST-segment elevation myocardial infarction (NSTEMI), and a coronary angiography was planned.
Table 1Background date, vital sign, and laboratory findings of 4 patients with Russula subnigricans poisoning at the time of emergency department admission
CK-MB=creatinine kinase myocardial band.
After that, Patient 2 (son-in-law of Patient 1) and 3 (daughter of Patient 1) were transferred from a local emergency room (ER) with a diagnosis of rhabdomyolysis. They had eaten mushrooms 36 h before admission to the ER and complained of similar symptoms to Patient 1. Neither of them had a significant medical history. Their hemodynamic conditions were stable. Their laboratory tests revealed elevated creatinine kinase (CK) and myoglobin levels (Table 1). Rhabdomyolysis was diagnosed in both patients, and they were hospitalized in an intensive care unit.
When Patients 2 and 3 arrived at Pusan National University Yangsan Hospital, where Patient 1 was admitted, the additional history that he had also shared the meal containing foraged mushrooms was conveyed to his clinical team, and they then suspected he was also suffering toxicity from mushroom ingestion. Echocardiography and serial cardiac enzyme sampling were performed to differentiate the presenting symptoms from those of NSTEMI at 2 h after the emergency department visit of Patient 1. Echocardiography showed normal left ventricle size and contractility, and there was no definite regional wall motion abnormality. Cardiac enzymes were not significantly elevated from the baseline level (CK 7685 U·L-1, hs-TnI 75 pg·mL-1), CK-MB >300 ng·mL-1). Rhabdomyolysis due to mushroom poisoning was then diagnosed, and Patient 1 was hospitalized in an intensive care unit for close observation and treatment.
Patient 4 (wife of Patient 1) was initially admitted to the emergency department of another hospital for mushroom poisoning investigation. She had mushrooms for dinner with her family, and immediately after mushroom ingestion, she developed nausea, vomiting, and diarrhea. She was treated and, after her symptoms improved, discharged. Two days later, she visited the Pusan National University Yangsan Hospital emergency room, but she had no specific complaints. Her hemodynamic status was stable and laboratory test results were unremarkable. She was discharged from the emergency department.
For the analysis of toxic substances, a picture of mushroom leftovers (Figure 1) was sent to a mycologist via mobile phone, and specimens of the mushrooms along with blood and urine samples of all family members were sent to the Forensic Toxicology Department, National Forensic Service, Wonju-si, Gangwon-do, Korea. The mushrooms were identified as R subnigricans based on gross morphology, and cyclopropylacetyl-(R)-carnitine, an indicator component of R subnigricans,
5
Identification of cyclopropylacetyl-(R)-carnitine, a unique chemical marker of the fatally toxic mushroom Russula subnigricans.
Chem Pharm Bull (Tokyo). 2016; 64: 602-608
was detected in mushroom leftovers and urine samples, but was below the detection limit in blood samples.
After admission, primary fluid resuscitation was performed to prevent renal failure and failure of other organs as a consequence of rhabdomyolysis. Serum CK and myoglobin levels further increased on the day after admission. However, 3 d after hospitalization, serum CK and myoglobin levels gradually declined (Figures 2 and 3), and most of the symptoms, including chest pain, myalgia, nausea, and vomiting, disappeared. The patients were discharged without any complications after hospitalization for 7 to 10 d.

A new type of mushroom poisoning has been identified in recent years. Several case series of R subnigricans poisoning with rhabdomyolysis have been reported in China, Japan, and Korea.
6
A case of mushroom poisoning with Russula subnigricans: development of rhabdomyolysis, acute kidney injury, cardiogenic shock, and death.
J Korean Med Sci. 2016; 31: 1164-1167
,
7
Russula subnigricans poisoning: from gastrointestinal symptoms to rhabdomyolysis.
Wilderness Environ Med. 2015; 26: 380-383
The most severely ill patients presented with electrolyte disturbances (hyperkalemia, hypocalcemia), respiratory failure, acute renal failure, pulmonary edema, ventricular tachycardia, and circulatory shock. A possible cause of rhabdomyolysis after the ingestion of R subnigricans is cycloprop-2-ene carboxylic acid.
8
Identification of the toxic trigger in mushroom poisoning.
Nat Chem Biol. 2009; 5: 465-467
The mechanism of this toxin is the depletion of ATP within myocytes, which leads to an unregulated increase in intracellular calcium, resulting in myocyte disintegration.
8
Identification of the toxic trigger in mushroom poisoning.
Nat Chem Biol. 2009; 5: 465-467
In the case presented here, 3 people from 1 family developed severe rhabdomyolysis due to R subnigricans poisoning.
In this case, Patient 1 was admitted to the emergency room with chest and back pain. He was misdiagnosed with NSTEMI because of chest pain and elevated cardiac enzyme levels. However, additional medical history revealed that the same wild mushrooms were consumed by him and his family members who developed rhabdomyolysis. Furthermore, dynamic changes >50% in hs-TnI levels from presentation to a 3-h retest identifies patients at high risk for acute coronary syndrome,
9
Asia-Pacific consensus statement on the optimal use of high-sensitivity troponin assays in acute coronary syndromes diagnosis: focus on hs-TnI.
Heart Asia. 2017; 9: 81-87
but there was only a slight change between consecutive hs-TnI tests in Patient 1. Also, to improve on the cardiac specificity of CK for the diagnosis of acute myocardial infarction, measuring both total CK and CK-MB is recommended. A CK-MB to CK ratio of >6% is specific for myocardial injury, whereas a ratio of <6% in consistent with skeletal muscle damage or noncardiac causes.
10
Cardiac markers in the early diagnosis and management of patients with acute coronary syndrome.
Sultan Qaboos Univ Med J. 2009; 9: 231-246
In Patient 1, the CK-MB (250 ng·mL-1) to CK (7685 U·L-1) ratio was 3%, consequently myocardial infarction could be excluded. In addition, there was no regional wall motion abnormality on echocardiography and no abnormal ECG findings. Therefore, diagnosis was confirmed as rhabdomyolysis induced by mushroom poisoning rather than myocardial infarction. Cardiac troponin I (TnI) elevation is common among patients with rhabdomyolysis,
11
The prevalence of false-positive cardiac troponin I in ED patients with rhabdomyolysis.
Am J Emerg Med. 2005; 23: 860-863
but the underlying mechanism of its elevation is unclear. The possible reasons for micro injury to the myocardium as a cause of elevated TnI concentration in cases with rhabdomyolysis include the presence of free radicals or circulating cytokines, cardiotoxicity due to ion fluxes, high acidemia, hypotension and hypoperfusion, and myocardial stretch due to aggressive fluid resuscitation.
12
Elevated serum cardiac troponin I in rhabdomyolysis.
Int J Cardiol. 2004; 96: 35-40
However, the possibility of direct myocardial damage caused by a mycotoxin cannot be completely ruled out, and further study is required. Therefore, to differentiate myocardial infarction from rhabdomyolysis, it should be necessary to obtain the patient’s full history of the present illness, as well as to carry out serial electrocardiogram and cardiac profile analyses, echocardiography, and CK-MB proportion analysis.
Nonpoisonous edible R nigricans can be mistaken for poisonous R subnigricans. The most useful characteristic for differentiating R subnigricans from R nigricans is the color change that occurs after scratching the fruiting body. Both species have whitish flesh that is tinged reddish brown when scratched. Subsequently, the color of R nigricans turns black, whereas that of R subnigricans is persistent.
13
Rhabdomyolysis: an unusual feature with mushroom poisoning.
Am J Kidney Dis. 2001; 38: E17
However, classifying these species based only on this color change is difficult and unreliable, and the expertise of a mycologist is essential for accurate identification. In this case, we sent a picture of the mushrooms eaten by our patients to a mycologist via mobile phone, who immediately identified the mushrooms as R subnigricans, which is known to cause rhabdomyolysis. Recently, cycloprop-2-ene carboxylic acid was isolated and identified as the fatal toxin of R subnigricans. However, identifying this compound is difficult due to its instability; the concentration of a solution of this toxin by drying, a common technique in chemical separation and isolation steps, promotes its polymerization. Thus, the usefulness of this toxin as a unique marker of genuine R subnigricans is limited. However, to discriminate genuine R subnigricans from similar but unclassified Russula species, cyclopropylacetyl-(R)-carnitine could serve as a unique chemical marker, which is sufficiently stable under ordinary experimental conditions and easily recognizable. It can be a useful marker specific to R subnigricans.
5
Identification of cyclopropylacetyl-(R)-carnitine, a unique chemical marker of the fatally toxic mushroom Russula subnigricans.
Chem Pharm Bull (Tokyo). 2016; 64: 602-608
To the best of our knowledge, this is the first report of cyclopropylcetyl-(R)-carnitine in the urine of patients with mushroom poisoning.
In mushroom poisoning, toxicity varies based on the ingested amount, mushroom age, the season when the mushrooms were picked, the geographic location, and the way in which the mushrooms were prepared prior to ingestion.
14
Mushroom poisoning: retrospective analysis of 294 cases.
Clinics (Sao Paulo). 2010; 65: 491-496
In our case, the patients ingested the same mushrooms, and only Patient 4 developed nausea, vomiting, and diarrhea immediately after eating, whereas the rest of the patients had no specific symptoms. However, 24 h after ingestion, the rest of the family developed nausea, vomiting, and myalgia, and severe rhabdomyolysis was diagnosed. It was difficult to determine the intake in detail. Patient 4 may have ingested less mushrooms or absorbed a lower amount of toxins because of vomiting and diarrhea. Cyclopropylacetyl-(R)-carnitine was detected in the urine of all patients, but its concentrations were not determined. In the future, using a quantitative test could be helpful for assessing its toxicity.
Mushroom poisoning with rhabdomyolysis is usually associated with volume depletion due to vomiting, diarrhea, and the sequestration of water in damaged muscles. Early and vigorous replacement of fluids is the first step in rhabdomyolysis management.
15

The related hyperkalemia must also be promptly treated. However, early hypocalcemia should not be treated unless it is symptomatic or if severe hyperkalemia is present, as calcium loading could increase the precipitation of calcium phosphate in necrotic muscles.
16
Acute kidney injury due to rhabdomyolysis.
Saudi J Kidney Dis Transpl. 2008; 19: 721-729
As various mushroom species cause various toxicities, it is difficult to diagnose and treat patients with mushroom poisoning in the emergency department. A picture of the ingested mushrooms along with patient blood and urine assessments should be sent to a mycologist to help in the accurate diagnosis and identification of mushrooms. Patients with a history of mushroom ingestion and ongoing symptoms should be observed or admitted until the symptoms resolve and organ damage is excluded, or until the mushroom has clearly been identified as nontoxic.