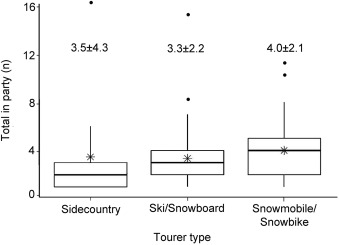 Avalanche Preparedness and Accident Analysis Among Backcountry Skier, Sidecountry, and Snowmobile Fatalities in the United States: 2009 to 2019

Avalanche Preparedness and Accident Analysis Among Backcountry Skier, Sidecountry, and Snowmobile Fatalities in the United States: 2009 to 2019
Previous ArticleNonfreezing Cold Injury and Cold Intolerance in Paddlesport
Next ArticleLatency of Symptom Progression in Mild Daboia palaestinae Envenomation

While avalanche fatalities have remained relatively steady per year, data suggest a possible increase in sidecountry use and snowmobile fatalities. Limited information is known regarding the accident details and preparedness among different groups of backcountry users including snowmobiles, sidecountry, and backcountry skiers, and what specific factors could contribute to their fatalities.

Avalanche fatality reports covering all US states posted by the Colorado Avalanche Information Center available online for 10 seasons (2009–2010 through 2018–2019 seasons) were analyzed for group size, specific equipment carried, burial depth, burial time, and other details. Only reports in the 3 following categories were included in the analysis: backcountry ski/snowboard, sidecountry ski/snowboard, and snowmobile/snowbike. These aspects were compared among the 3 tourer types using statistical analyses (ANOVA).

Two hundred and five fatalities were analyzed (n=32 sidecountry, n=91 skier/snowboard, n=82 snowmobile/snowbike). Using 2 preparedness scores, the ski/snowboard group had the greatest distribution of high scores when evaluated by equipment carried and group size, with significant differences per group (P<0.01). Of the fatalities that were buried, burial time was related to the tourer group (P=0.04), with the ski/snowboard group having the highest proportion of burials <15 min. Burial depth was significantly different among the 3 tourer groups, with snowmobiles buried the deepest on average (P<0.01).

Despite limited data available on fatalities, an analysis of preparedness suggests that backcountry skiers and snowboarders are more prepared for avalanche accidents compared to snowmobiles and sidecountry users when evaluated by equipment carried and group size.