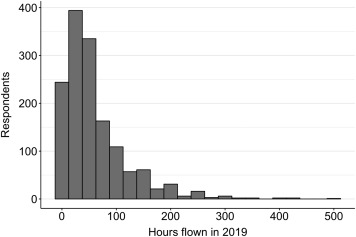 Paraglider pilots were surveyed regarding experience, incidents, recordkeeping, and risk perception. The survey could not capture those who had left the sport or died, so a subset of responses from UK pilots was compared to records from an incident database.

There were 1788 (25%) responses from 7262 surveyed. Respondents flew a total of 87,909 h in 96,042 flights during 2019. Local flying was most frequent (n=37,680 flights, 39%) but a higher proportion of hours were spent flying cross-country (n=33,933 h, 39%). The remainder were spent in competition, hike and fly, tandem, aerobatic, or instructional flight. Flying incidents led to 103 (6%) respondents seeking medical attention, attending hospital, or missing a day of work in 2019. Near misses were reported by 423 (26%) pilots. Asymmetry and rotational forces typically led to incidents, and limb and back injuries resulted. Pilots frequently failed to throw their reserve parachutes. Only 3 (0.6%) incidents involved equipment failure, with the remainder attributed to control or decision errors. Incident rates of paragliding were estimated as 1.4 (1.1–1.9) deaths and 20 (18–27) serious injuries per 100,000 flights, approximately twice as risky as general aviation and skydiving.