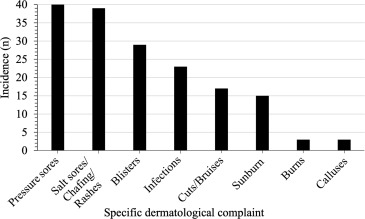 Ocean rowing is an extreme ultraendurance sport in which athletes push themselves to their mental and physical limits while rowing across an ocean. Limited academic attention has meant health issues facing this population are poorly understood. This report provides a descriptive analysis of the injuries and illnesses encountered by ocean rowers at sea and suggests potential preventative measures.

Retrospective self-reported data were collected from ocean rowers via an online 29-question survey, classified by medical system, and totaled to produce a report of the most frequently encountered symptoms.

This report presents the physiological, mental, and medical challenges facing ocean rowers. Dermatologic and musculoskeletal issues were most common and varied greatly in severity. Over 90% of reported infections occurred as a dermatologic complaint, demonstrating the importance of preventative measures such as hygiene and wound care. Continued work with a larger population is required to further understand the physiological stress and medical complaints associated with transoceanic rowing.