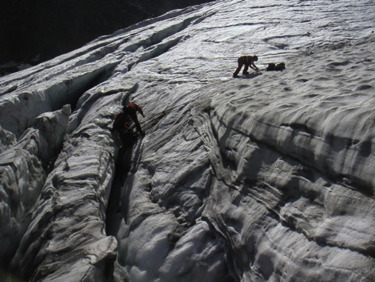 On a warm day in August 1990, a 21-y-old male was hiking with 2 friends in the Austrian Alps. He was wearing only a t-shirt, shorts, and light hiking shoes. At 1235, the 3 hikers were traversing a glacier at 2920 m when an ice bridge collapsed. The hikers were not a roped party, and the victim fell about 15 m into a crevasse. The emergency dispatch center was informed immediately. At 1255, a helicopter winched a mountain rescuer onto the glacier. With the help of some bystanders, the rescuer abseiled (rappelled) into the 0.5 m wide crevasse, where he found the patient mostly buried under snow and ice. The patient was still moving. After 15 min of digging, the mountain rescuer had freed the patient’s head. His mouth and the nose had been in an air pocket. The patient was conscious and reported pain. During the next hour, the rescuers dug the patient out of the snow and ice. His cries diminished, and finally, after 45 min, he lost consciousness. The rescue team expedited the evacuation by attaching the patient’s feet to a rope (his legs were the least buried) and pulling him feet-first out of the crevasse. He had been in the crevasse for approximately 100 min.
At 1415, on the glacier’s surface, the helicopter’s emergency physician determined that the patient was in cardiac arrest. Cardiopulmonary resuscitation was started. The pupils were fixed and dilated. The epitympanic temperature was 19.4°C. The patient was initially ventilated with a bag-valve mask before being intubated. Except for several bruises, no other injuries were found. The patient was flown to the nearest hospital, a trauma center without ECLS capabilities, arriving at 1445.
In the emergency department, the electrocardiogram showed asystole. Rectal temperature was 25°C. The patient was transferred to the operating room, where a central venous catheter was inserted. Capillary blood gas analysis revealed pH 7.12, bicarbonate 15 mmol·L-1, and potassium 2.8 mmol·L-1. At 1530, a laparotomy was performed to start peritoneal lavage with warm normal saline. Thirty minutes later, rectal temperature had increased to 26.7°C. A sternotomy was performed to allow cardiac lavage with warm normal saline. Ventricular fibrillation developed at 1645. Lidocaine was administered intravenously, followed by internal defibrillation. At 1650, the rhythm was converted to sinus bradycardia by defibrillation, and the patient began breathing spontaneously. Cardiopulmonary resuscitation was discontinued after having been administered for approximately 165 min. At 1700, the heart rate was 100 to 130 beats·min-1, and blood pressure became measurable for the first time at 80/50 mm Hg. Blood pressure increased to 130/80 over the next 2 min. When the rectal temperature reached 29°C, at 1700, the pupils became less dilated and were reactive to light.
Cardiac lavage was discontinued, but peritoneal lavage was continued until 1830. To hasten rewarming, hemodialysis was started at 1700 with the catheter in the right internal jugular vein. At 1800, the rectal temperature reached 33°C. At 1900, it was 35.2°C, and hemodialysis was discontinued.
The patient was admitted to the intensive care unit. A computed tomography (CT) scan of the head showed no cerebral edema. On Day 2, weaning from ventilation was started, and 2 d later the patient opened his eyes. He started moving his extremities the next day. On Day 6, he was extubated. The patient developed symmetric myoclonus in all 4 extremities, successfully treated with intravenous clonazepam. On Day 17, he developed acute necrotizing pancreatitis with sepsis and respiratory failure. A laparotomy was performed. Fifty-four days after the accident, he was discharged from the intensive care unit. Rehabilitation lasted 3 mo. He made a full neurologic recovery.

On a summer day in 2003, a 40-y-old man was hiking alone on a glacier in the Grossglockner area in Austria when he fell feet-first into a crevasse. His feet were so tightly wedged in the crevasse that he was unable to free them. He was immersed to his shoulders in icy water. He was able to call for help using his mobile phone. The patient was stabilized by the rescue team with ropes around his body. He was pulled out of the crevasse in prone position 2 h after his fall (Figures 1 and 2). The epitympanic temperature was 29°C. The patient was flown with a long line to the site where the emergency physician was waiting. During this short flight, he lost consciousness. The Glasgow Coma Scale score was 7. He was sedated and intubated by the emergency physician on site. A helicopter flew the patient to the hospital in Lienz, Austria.
On admission to a trauma center without ECLS capabilities, the rectal temperature was 26.8°C and blood pressure was 120/80 mm Hg. He had large excoriations on both shoulders and arms from the fall and his attempts to extricate himself from the crevasse. Forced air warming was started with a Bair Hugger (3M, Maplewood, MN, USA). The patient went into ventricular fibrillation during transport to the CT scanner. Cardiopulmonary resuscitation was started. Three defibrillation attempts were unsuccessful. The patient was immediately transferred to the operating room, where a sternotomy and laparotomy were performed. Open cardiac massage and rewarming of the heart and peritoneal cavity with warm normal saline were started. After 2 h, the core temperature was 34°C. At that time, external defibrillation restored sinus rhythm. High doses of catecholamines were needed to maintain adequate blood pressure. Because of intraoperative blood loss and coagulopathy, packed red blood cells and fresh frozen plasma were administered. The post-resuscitation phase was complicated by acute respiratory distress syndrome and acute kidney failure. Intermittent hemofiltration was required until Day 5, followed by hemodialysis. Sedation was discontinued on Day 8, but the patient did not regain consciousness. A CT scan showed signs of possible diffuse hypoxic brain damage. On Day 9, the patient was transferred to a hospital near his hometown. He was still intubated, on assisted spontaneous ventilation, and on renal replacement therapy. The next year, he visited one of the coauthors, personnel at the helicopter emergency medical service base and in the hospital, who had cared for him. He had resumed his job and fathered a healthy child. During the next 4 summers, he visited the area and hiked the local mountains.