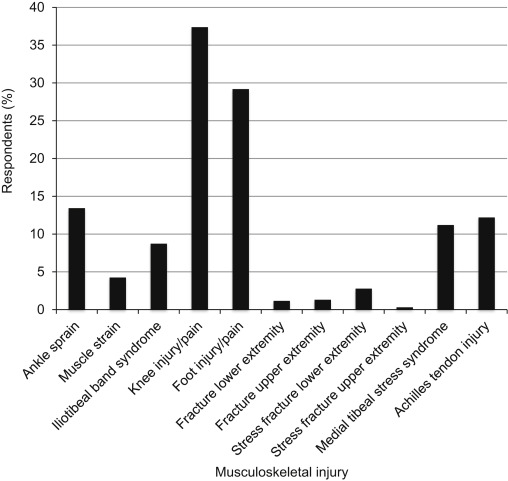 Survey of Musculoskeletal Injuries, Prehike Conditioning, and On-Trail Injury Prevention Strategies Self-Reported by Long-Distance Hikers on the Appalachian Trail
Previous ArticleNo Change in the Use of Antivenom in Copperhead Snakebites in Ohio
Next ArticleDifferentiating Sources of Fecal Contamination to Wilderness Waters Using Droplet Digital PCR and Fecal Indicator Bacteria Methods

Studies show that 40 to 60% of long-distance hikers on the Appalachian Trail experience musculoskeletal (MSK) injuries, but these studies are over a decade old. The increasing popularity of hiking and injury prevention advances warrant re-evaluation of injury patterns. We sought to determine the frequency of self-reported MSK injuries in long-distance hikers on the Appalachian Trail and associations with prehike conditioning and on-trail injury prevention strategies.

Musculoskeletal (MSK) conditions affect 20 to 30% of people worldwide and are the main contributors to disability.
1
Global, regional, and national incidence, prevalence, and years lived with disability for 354 diseases and injuries for 195 countries and territories, 1990–2017: a systematic analysis for the Global Burden of Disease study 2017.
Lancet. 2018; 392: 1789-1858
In the United States, MSK injuries account for more than 1.7 million hospitalizations, 23 million emergency or outpatient visits, and 40 million physician office visits per year.
2

Identifying injury patterns and prevention strategies in recreational activities with high MSK injury rates provides background data for the creation of injury prevention programs.
Hiking is the fourth most popular outdoor activity in the United States.
3

The activity is increasing in popularity, with 45 million people participating in hiking in 2017, up from 32 million in 2008.
3

MSK injuries are common among long-distance hikers, a subset of the hiking population. An example of a long-distance hike is attempting to complete the Appalachian Trail (AT), which runs from Georgia to Maine, covering approximately 3540 km (2200 mi) with a total elevation gain/loss of over 141,580 m (464,500 ft). To complete the trail in 1 season, an average AT hiker will backpack 13 to 32 km (8–20 mi) per day over 5 to 7 mo.
Previous studies have attempted to evaluate injuries in this population. A survey of 180 long-distance hikers during the 1987 to 1988 AT hiking season found 62% of hikers reported extremity or joint pain.
5
Health care needs of Appalachian trail hikers.
J Fam Pract. 1993; 36: 521-525
Another study surveyed 280 participants who hiked along the AT for at least 7 d (duration of hike: 140±60 [mean±SD] d) in 1997.
6
Medical risks of wilderness hiking.
Am J Med. 2003; 114: 288-293
Among these hikers, acute and overuse MSK complaints were reported by 43% and were the most common cause for discontinuing the hike. In 2006, a survey evaluated the effects of ultralight backpacking and less rigid footwear in 128 long-distance hikers, hypothesizing that improvement in hiking gear may have decreased MSK injury rates over the years.
7
The impact of footwear and pack weight on injury and illness among long-distance hikers.
Wilderness Environ Med. 2009; 20: 250-256
MSK complaints were reported in 42% of participants.
Although these studies show a pattern of MSK injuries in long-distance hikers, the studies are over than a decade old and have limited sample sizes. Given advances in hiking gear and training knowledge, as well as a large increase in the numbers of hikers, recent MSK injury patterns may differ from those previously reported. The goal of this study was to determine the frequency of self-reported types of MSK injury among long-distance hikers on the AT and their association with prehike conditioning, stabilization gear, and recovery days. In addition, we assessed on-trail strategies such as hiking patterns—some hikers consider a northbound route on the AT a strategy for on-trail training by hiking flat lands before reaching higher elevations. As an exploratory survey, the objective was to ascertain a more current picture of MSK injuries and injury prevention strategies reported by AT long-distance hikers.

This was a cross-sectional electronic survey of AT long-distance hikers in the 2018 to 2019 season. Long-distance hikers on the AT have a choice to voluntarily register with the Appalachian Trail Conservancy (ATC) at the beginning of the hiking season. At the end of every season, the ATC emails a survey using SurveyMonkey Inc. to all registered hikers. The yearly survey created by the ATC includes questions about trail specifics such as hiking patterns, amenities, security, and trail crowding. Our orthopedic team added 10 questions specific to training and injury to the ATC yearly survey. We did not have input on the rest of the yearly survey. Participants answered a total of 57 questions. From the final survey, 15 questions were analyzed for this study (10 that were added and 5 that were part of the original ATC survey). The added questions can be found in Table 1. The remaining 42 questions were specific to trail conditions and amenities rather than hikers and were not used for this research. This study was deemed exempt by the Thomas Jefferson University institutional review board.
Table 1Survey questions from the ATC annual survey with absolute count and relative frequency of cases (%) using respondents per question as denominator
AT, Appalachian Trail; ATC, Appalachian Trail Conservancy.
The nonvalidated survey included structured and semistructured questions. Questions were not pretested. All registered long-distance hikers during the 2018 to 2019 AT hiking season were included in the study and contacted by the ATC through email for possible participation in the survey. Our research team did not have direct access to the hikers per the agreement with the ATC for the intent of preserving hiker confidentiality. Long-distance hikers on the AT who did not register with the ATC were excluded from the study. The survey invitation was sent once by email using the registered account information. There were no reminders or follow-up contact. The surveys were distributed electronically by the ATC in January 2019, coinciding with the ending of the hiking season. Survey results were collected by the ATC through the end of April to allow adequate time for response. Upon completion of the collection period, the ATC forwarded deidentified data to our orthopedic team for the purpose of analysis. No data were provided on the nonresponse group. Basic demographic information, such as age, sex, and body mass index, was not included.
Descriptive statistics and measures of frequencies are reported. Percentages were calculated from the number of the research cohort. All responses that were listed under “other, please specify” were reviewed by an orthopedic provider to determine MSK category. Those injuries that did not fall under MSK injury (eg, vitreous detachment) were not used for calculations. Pearson χ2 analysis was used to compare categorical variables. Simple logistic regression was performed to determine the effect of prehike training on having an MSK injury. Statistical significance was set at P<0.05. All statistical analyses were done using R Studio (Version 3.6.3, Vienna, Austria).

This study has several limitations. Only using long-distance hikers who registered with the ATC may have introduced selection bias. For example, more experienced hikers who were not interested in being recognized or less experienced hikers who were not aware of the registration process may have been excluded. The limited response rate (52%) may have created bias because those who responded may not adequately reflect the target population.
Another limitation is the use of self-reported injuries. Although diagnosis by a medical provider may have provided information that is more accurate, the hikers determined that not all of the injuries required medical attention or they chose not to seek care. Relying on hikers to self-report injuries provided insight into their MSK injuries, but it created the potential for inaccurate reporting. Recall bias may have also influenced results because participants were given the questionnaire at the end of the hiking season.
In addition, the questions in the survey were untested. They may not have collected the information as intended or they may have introduced surrogate information bias (forcing respondents to choose from a list of options). By adding “other, please specify,” we attempted to decrease this bias and give participants an opportunity to generate their own answers. Item nonresponse was an issue and may have led to biased estimates. It may have partly been a result of question design, such as in the example of using the terminology “zero days”, which may not have been as widely used by hikers as believed during study design. Unmeasured confounding may have also influenced results, including creating a barrier to determine how basic demographics such as age, sex, and body mass index influenced outcomes. We were unable to establish optimal descriptive statistics and correlations across data owing to limited, untested questions and lack of demographic information.

Among multiple MSK injuries reported, overuse/chronic injuries were reported more frequently than acute MSK injuries in long-distance hikers who responded to this survey. Although prehike training strategies, utilization of stabilization gear, and use of recovery days varied among respondents, those who reported that they did not train before the hike were more likely to have an MSK injury, whereas those who used stabilizing footwear and aids were less likely to do so. Further research is needed to understand whether prehike conditioning and on-trail strategies can decrease MSK injuries in the AT long-distance hiking population.
Acknowledgments: We thank the Appalachian Trail Conservancy for their collaboration.
Author Contributions: Study concept and design (MK, AC); data acquisition and analysis (MK, AC); drafting, critical revision, and approval of the final manuscript (MK, AC).
Financial/Material Support: None.
Disclosures: None.