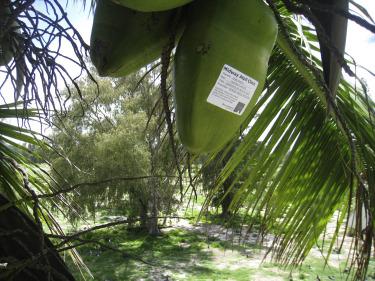 Remote and austere medicine can be challenging when caring for healthy individuals and requires ingenuity when managing patients with unexpected, complex disease processes, whether acute or chronic. We report the case of an adult male who presented to an isolated clinic setting with acute exacerbation of chronic liver disease. Medical management was complicated by limited transportation resources, both for supplies and patient movement. There was concern that the patient’s clinical status could decompensate into a life-threatening illness that might not be adequately treated in this remote setting. Through the use of collaborative decision-making with the patient and by telemedicine consultation, the patient was successfully stabilized on the island until routine transport to a higher level of care was available. Knowledge of climbing systems and alternative transportation arrangements were integral to our ability to provide prolonged care for this patient in a remote setting. Knowledge of the use of medicinal plants was key in offsetting the side effects of other medications used. We are reminded that creative and collaborative problem-solving epitomizes wilderness and austere medicine.

Improvements in the management of chronic disease, ease of travel, and increased staffing in remote settings have resulted in medical providers caring for patients in austere settings who may not have previously met remote medical clearance requirements. Healthcare professionals in remote settings should possess a thorough understanding of acute, as well as chronic, disease management and have an aptitude for dealing with unexpected circumstances by using nontraditional medical therapies and interventions.

Cirrhosis with anasarca is an example of complex chronic disease management that is usually managed within the confines of traditional healthcare facilities but can now be seen in austere settings, where the consequences of acute exacerbation are significant and potentially life-threatening. Standard care typically is sodium restriction and diuretic initiation (spironolactone with or without furosemide).
7
Management of adult patients with ascites: an update.
Hepatology. 2009; 49: 2087-2107
,
8
EASL clinical practice guidelines on the management of ascites, spontaneous bacterial peritonitis, and hepatorenal syndrome in cirrhosis.
J Hepatol. 2010; 53: 397-417
Fluid status monitoring can be challenging in the austere environment. Ascites can be tracked via serial recording of abdominal girth. In the present case, exact measurements were not recorded, but girth was tangentially evaluated by the patient’s ability to successfully use the snaps on the bottom of his shirts and close the top button on his pants.
Hypokalemia is a known complication of liver disease, and monotherapy with loop diuretics could have exacerbated the issue.
7
Management of adult patients with ascites: an update.
Hepatology. 2009; 49: 2087-2107
Empiric potassium supplementation was warranted given the inability to reliably check potassium levels in the austere setting.
Coconut water has been shown to have applicability in multiple areas of medical practice.
2
Coconut water uses, composition and properties: a review.
Fruits. 2012; 67: 87-107
Studies have shown equivalency to normal saline when used as an intravenous resuscitation fluid in healthy volunteers.
9
Influence of coconut water on hemostasis.
Am J Emerg Med. 2001; 19: 287-289
Coconut water taken orally has been studied for recovery and as an oral rehydration fluid.
2
Coconut water uses, composition and properties: a review.
Fruits. 2012; 67: 87-107
Medical professionals operating in austere environments may benefit from knowledge of the use of coconut water for patient care.
Potassium supplementation is available through myriad food sources. Potassium-rich foods include both shelf-stable and fresh foods. Fruit sources include dried apricots (1900 mg K+ per 100 g), dates, and bananas. Legumes are known sources of potassium, with white beans having the highest content (561 mg K+ per 100 g). Other foods common to athletes, such as salmon, avocado, and sweet potato, are also relatively high in potassium.
10
Potassium.
Adv Nutr. 2012; 3: 820-821
This case highlights how telemedicine, second-line therapies, ingenuity, and knowledge about prevention of complications can temporize a disease process before problems progress to emergencies. Nonmedical skills, such as local plant use, nonstandard transportation platforms for supplies, and familiarity with rope systems, can potentially assist in the care of patients in austere environments.

Astute clinicians in remote locations will likely continue to encounter patients with unexpected health conditions that require creativity, collaboration, and skill to manage. This case illustrates many aspects of wilderness and austere medicine, including limited resources, difficult evacuation logistics, telemedicine, prevention of complications through an understanding of medication side effects, and even nonmedical technical skills, such as improvised climbing techniques. Creative problem-solving is key to successful medical management in the austere environment. Potassium supplementation using coconut water may be a safe and effective alternative when traditional therapies are unavailable, although a lack of objective dosing and the limited prospective data should be carefully considered before implementing the practice.
Author Contributions: AM generated the manuscript outline and wrote the initial case summary. JW wrote the initial discussion and conclusion and identified citations. Both authors participated in writing the manuscript and undertaking critical revisions and approved the final version.
Financial/Material Support: None.
Disclosures: None.