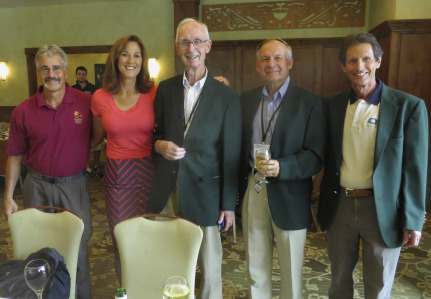 The following article was originally published in Wilderness Medicine: Newsletter of the Wilderness Medical Society in January 1991, based on an interview with Bruce Paton. At the time, he was 65 years old.

Because this article is part of the WMS historical archive, I did not update it with his activities and accomplishments in later life. Much of this is captured in the following commentaries. Dr Paton retired from private practice in cardiovascular surgery in 1995, which left more time for his outdoor and artistic pursuits. Fortunately, he continued his involvement with the WMS, serving as the seventh president (1996–1998) (Figure 1). Bruce continued watercolor painting (Figures 2 and 3) and writing, which combined his interests in wilderness medicine and history.
17
Lewis & Clark: Doctors in the Wilderness.
Fulcrum Publishing, Golden, CO2001
,
18
Adventuring with Boldness: The Triumph of the Explorers.
Fulcrum Publishing, Golden, CO2006
,
19
“From Larrey to Mills”: the road to rapid rewarming—a commentary.
Wilderness Environ Med. 1998; 9: 223-225
,
20
A history of frostbite treatment.
Int J Circumpolar Health. 2000; 59: 99-107
,
21
Joseph Lister, antiseptic surgery, and wilderness medicine—a commentary.
Wilderness Environ Med. 2000; 11: 272-273
,
22
Robert Marshall, part I: preserver of wilderness.
Wilderness Environ Med. 1999; 10: 34-39
,
23
Bob Marshall, part II: exploring the Koyukuk.
Wilderness Environ Med. 1999; 10: 117-124
Bruce’s life spanned continents, cultures, and interests. He was an artist, scholar, and gentleman who showed no trace of arrogance. One was immediately struck with his intellect and broad knowledge supported by his diverse experience. We were fortunate to have engaged him in the WMS and to have had him as a mentor.