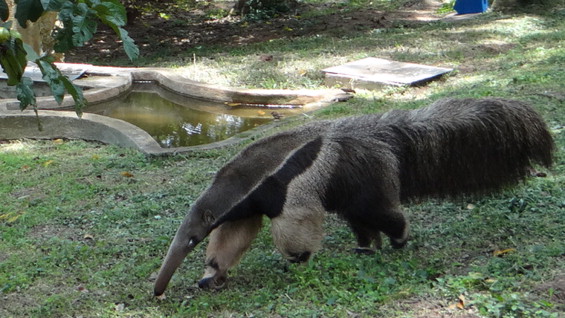 The fatal outcome of a defensive attack by a giant anteater (Myrmecophaga tridactyla) is reported. The attack occurred while the victim was hunting, and his dogs cornered the adult anteater, which assumed an erect, threatening position. The hunter did not fire his rifle because of concern about accidentally shooting his dogs. He approached the animal armed with a knife, but was grabbed by its forelimbs. When his sons freed him, he had puncture wounds and severe bleeding in the left inguinal region; he died at the scene. Necroscopic examination showed femoral artery lesions and a large hematoma in the left thigh, with death caused by hypovolemic shock. A similar case is cited, and recommendations are made that boundaries between wildlife and humans be respected, especially when they coinhabit a given area.

Anteaters or tamanduás (indigenous Tupi–Guarani name, which also means anteaters) are mammals that use a long, thin tongue to feed on ants and termites. Four species are common in Central and South America, the most common being the Southern or collared anteater (Tamandua tetradactyla), which is arboreal and reaches about 1 m (3 feet) in length, and the giant anteater or flag anteater (Myrmecophaga trydactyla), which can measure up to 2 m (6 feet) in length and weigh up to 40 kg (85 pounds). The Northern anteater (Tamandua mexicana) belongs to the genus Tamandua, and the fourth species, the silky anteater, belongs to the family Cyclopedidae, not the Mymecophagidae. These animals belong to the order Pilosa, suborder Vermilingua, and Myrmecophagidae family (Figure 1).
1
Order Pilosa.
in: Wilson D.E. Reeder D.M. Mammal Species of the World: A Taxonomic and Geographic Reference. 3th ed. Johns Hopkins University Press, Baltimore, MD2005: 100-103
,
2
Anteater behavior and ecology.
in: Vizcaíno S.F. Loughry W.J. The Biology of the Xenarthra. University Press of Florida, Gainesville, FL2008: 257-268
Giant anteaters have terrestrial habits and live in fields or cerrados (savannah-like environments). They have poor vision and hearing, putting them at constant risk of injury or death by motor vehicle collision. Anteaters are not aggressive to humans, but they can defend themselves by assuming an upright position and using their powerful forelimb claws, which are normally used to dig out anthills and termite nests when seeking food. They have 5 toes on each foot, but the forelegs have 4 claws, 3 being particularly developed (Figure 2). Injuries caused by anteaters in humans are rare and occur in those who provoke or try to hunt the animals and in professionals who handle them for scientific proposes (VHJ, personal observation). The claws are sharp and can cause serious tissue laceration and copious bleeding.

The victim was a male 47-year-old resident of the Boa Fé rubber plantation in Guajará County, Amazonas State in northern Brazil. On August 1, 2012, he was hunting with his 2 sons when their dogs cornered an adult giant anteater, which assumed an erect, threatening position. The hunter did not fire his rifle because of concern about accidentally shooting his dogs. He approached the animal armed with a knife, but was grabbed by its forelimbs. When his sons freed him, he had puncture wounds and severe bleeding in the left inguinal region and died of exsanguination at the scene. The anteater was killed with 5 shots by one of the sons, who was also slightly injured.
The body of the victim was transferred to Cruzeiro do Sul county Legal Medicine Institute by a team that included an expert from the Institute of Criminalistics and police from Cruzeiro do Sul Special Operations Group. Forensic examination conducted at the Medical Forensic Institute showed the cadaver of a 47-year-old male presenting livores mortis in the dorsal part of the body with rigor mortis. The body showed bruises and excoriation in the left side of the neck, two 4-cm blunt perforating injuries in the left arm (Figure 3), 8 blunt perforating wounds in the anterior left thigh (Figure 4), and abrasions to the right thigh.
Internal examination of the thigh revealed a large hematoma in the left thigh with lesions to the left femoral artery (Figure 5). It was concluded that death was attributable to injury of the left femoral artery and exsanguination.

Defensive attacks by giant anteaters are very rare and occur when they are threatened or handled during scientific studies or veterinary care in wild environments. Less serious injuries may occur during captive maintenance of specimens held in zoological parks and of privately held animals. Despite their large claws and aggressive stance when cornered (the popular expression “an anteater’s hug”), the animal prefers to withdraw and avoid encounters with humans, which is not always possible because of their poor vision and hearing. The tragic case described here was first and foremost an accident. However, another case in which circumstances were similar should also be considered; it is that of a 75-year-old man who was hunting and in which the cause of death was injury to the femoral artery with fatal bleeding. This death was reported in the press in Jangada County, Mato Grosso State, Brazil in 2010, but was not formally documented.
3

Treatment for injuries caused by the animal’s claws obeys the basic rules of major trauma: general care to control bleeding and fast transportation to a medical facility. The claws can pierce the skin and reach the major organs and great blood vessels, with penetration of the skin needing thorough evaluation. Broad-spectrum antibiotics may be important for controlling the secondary bacterial infections arising from injuries. These events should serve as a warning to respect the boundaries between wildlife and humans, especially when they coinhabit a given area.

The authors thank the CEMPAS (Center of Medicine and Research on Wild Animals of the Veterinary School of Botucatu–São Paulo State University) for the images of the giant anteater’s claws.