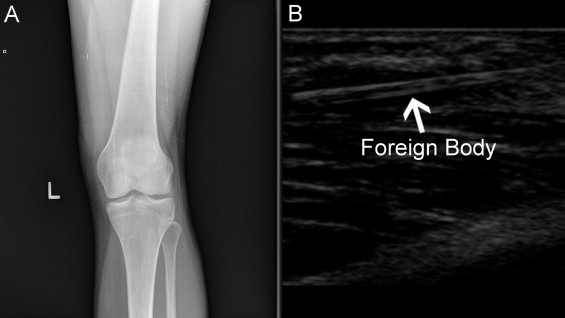 Retained foreign objects account for as much as 2% of soft tissue injuries sustained in the wilderness. Subcutaneously embedded fragments are often missed during the initial medical evaluation and may result in morbidity secondary to delayed removal. Although the utility of ultrasonography in the emergency department for the detection of retained objects is established, the potential use of point-of-care ultrasound to aid with foreign body removal in the field has not been well described. We present 2 case reports that demonstrate the value of ultrasonography in detecting and successfully removing foreign bodies sustained in the wilderness, and outline a procedural technique that minimizes morbidity and uses equipment available in wilderness medical field kits. We propose that with the advent of portable and handheld ultrasound units, foreign body removal in the field has become feasible and may decrease the morbidity of soft tissue injuries, particularly in austere and wilderness environments with limited access to immediate medical care.

The medical literature concerning foreign body related morbidity is limited, but the available data suggest that persons participating in wilderness activities are predisposed to a high frequency of soft tissue injuries. In fact, retained foreign objects are estimated to account for as much as 2% of wilderness sustained soft tissue injuries.
1
Morbidity and mortality in the wilderness.
Western J Med. 1998; 168: 4
The inability to promptly identify and remove such foreign bodies may result in patient morbidity by way of pain, infection, and inflammation, and potentially increase the financial burden to both the patient and the hospital owing to multiple physician visits and, in extreme cases, exploratory surgery.
2
Ultrasound in the emergency department: detection of wooden foreign bodies in the soft tissues.
J Emerg Med. 2002; 22: 75-79
Although fragments of metal or glass may be readily visualized using plain film radiography, wood, plastic, and thorns are radiolucent and may often remain undetected on initial medical evaluation unless the history and examination suggest the need for further imaging. Ultrasonography is superior to plain x-ray film in its ability to reliably identify radiolucent objects, and is increasingly being used as a diagnostic tool in the emergency department (ED) to rule out retained foreign bodies in patients presenting with soft tissue injuries.
3
The role of ultrasonography in detection and localization of radiolucent foreign body in soft tissues of extremities.
J Nepal Med Assoc. 2009; 48: 5-9
,
4
Sonography and radiography of soft-tissue foreign-bodies.
AJR Am J Roentgenol. 2001; 176: 1155-1159
Now, with the advent of portable and handheld machines, ultrasonography has the potential to be used in austere environments to offer on-site management for foreign body removal and reduce subsequent complications when access to medical services is either limited or delayed.
The following cases underscore the value of ultrasonography in detecting retained foreign objects commonly sustained in the wilderness, particularly in patients with a suggestive history or physical examination with negative radiographic imaging. Additionally, we present our technique for ultrasound-assisted removal that uses equipment available in medical field kits commonly taken on wilderness expeditions or stored in medical camps, and suggest the potential value of carrying portable, lightweight sonographic devices along with medical equipment when navigating austere environments.

A 25-year-old woman presented to the ED complaining of worsening left knee pain with movement. She attributed the onset of pain to 2 weeks earlier, when she had been running on a trail in the woods and brushed against some bushes. She described the pain as sharp and stabbing, but could not locate an entrance wound. She presented to a health care provider who did not suspect a foreign body, but rather a muscle strain. The pain continued to worsen, however, causing her to present to the ED for further evaluation.
A radiograph of the knee was negative for a foreign body (Figure 1A). Physical examination revealed no deformity, tenderness, or warmth to the knee, and full range of motion was retained. The patient expressed significant pain with knee flexion and extension.
A point-of-care ultrasound scan was performed and revealed 2 foreign bodies in the medial aspect of the left knee, approximately 30 mm and 25 mm in length (Figure 1B). Both were removed using the technique outlined below (Figure 2). The patient was followed up after 7 days for suture removal, with no complications.

A 32-year-old man presented to the ED 2 days after sustaining what he suspected to be a splinter while cutting down a tree. He had felt a sharp pain in the hypothenar region of his left hand but could not visualize or palpate a foreign body. Over the following days, his palm became erythematous and painful, prompting him to seek medical attention.
On examination, the patient was afebrile but had a warm, fluctuant area over the left palm. Plain film x-ray was negative for foreign body (Figure 3A). The region was lanced, with expression of purulent fluid. Given the history and the quantity of pus expressed, there was concern for a possible retained foreign body. A point-of-care ultrasound scan was performed and revealed a linear foreign body approximately 23 mm in length (Figure 3B). Sonographic images were used to estimate the depth of the foreign body from the surface, and the splinter was removed using the technique outlined below (Figure 4).

In these cases, a portable ultrasonography unit (M-Turbo, Sonosite, Bothell, WA) with a high-frequency 13-6 MHz linear array transducer was used to attain the sonographic images. The use of the linear array probe allows for optimal visualization of foreign bodies as hyperechoic objects with posterior acoustic shadowing. Alternative ultrasound devices may be used in the field, as long as they are equipped with a linear transducer. Here, we present a step-by-step description of the successful removal of a retained foreign body in austere environments using a portable ultrasound machine and available resources from medical field kits.
Upon identification of a foreign body, its approximate length and distance to the skin surface should be measured. Nearby structures such as nerve sheaths, joint spaces, and vascular bundles are also examined relative to the location of the foreign body. The foreign body should be visualized in both the longitudinal and transverse axes to fully evaluate the position and orientation, and to identify any fragments (Figure 5 image was obtained with a 14-5 MHz probe using Fazone CB, Fujifilm Medical Systems USA, Stamford, CT). The location where the foreign body is closest to the skin surface and where it may be removed through a path parallel to its long axis should be identified and marked on the patient's skin.
The skin is then disinfected using a chlorhexidine swab, alcohol, or sterile scrub brush, depending on what is available in the particular brand of medical kit. Please note that an open entrance wound should be irrigated with saline before sterilizing the surrounding skin. The ultrasound probe should be placed in a sheath or glove, and gel applied to the field. If available, local anesthesia should be delivered using ultrasound guidance in a path subcutaneously from the skin marking to the closest end of the foreign body. A 0.5 cm to 1 cm incision should then be made at the site of the skin marking using a number 11 blade scalpel. The incision should be large enough to accommodate the full width of the foreign body, which may be accurately measured using ultrasound.
While under direct ultrasound visualization, a set of tweezers or forceps should then be introduced through the incision and used to bluntly dissect a path to the tip of the foreign body (Figure 6). By holding the probe in long axis, both the foreign body and forceps can be simultaneously visualized (Figure 7). The forceps are then used to grip the tip of the foreign body and retract it to the skin surface (Figure 8; online E-video). Upon sonographic confirmation that the entire foreign body has been successfully removed, the wound is then irrigated, and the skin may be left open to heal by secondary intention. If the procedure can be done under sterile conditions, closure with nylon interrupted sutures may be an alternative. The selected method depends on the experience of the operator and the perceived cleanliness of the wound. In the case of multiple foreign bodies or fragments, the above procedure may be repeated as necessary.
As soon as access to medical care becomes available, tetanus status should be addressed and updated if necessary. Antibiotics may be necessary depending on the risk of infection and should be considered by the provider. Patients should follow up within 7 days for a wound recheck and suture removal if necessary. In cases of higher infectious risk, earlier return is prudent.
Limitations of the use of ultrasonography include adequate training of the operator. An inexperienced operator may miss or underestimate the size or orientation of the fragment and inaccurately mark its location in relation to skin surface. Shallow foreign bodies are also harder to detect owing to poor near-field resolution. In such cases, adjuncts such as stand-off pads or water baths may be used to improve focus.

The utility of ultrasound guidance for the identification and removal of retained foreign bodies has been established.
5
Clinically unsuspected foreign bodies: the importance of sonography.
J Ultrasound Med. 2003; 22: 1381-1385
However, the potential application of a portable ultrasonography unit to provide on-site medical management in wilderness environments and the technique for foreign body removal using limited resources has not been well described. Although the outlined technique may be performed without the aid of ultrasound visualization, sonographic images help to better locate foreign bodies and easily missed fragments, and allow for smaller and more precise incisions to be made. Because of the direct visualization of adjacent structures such as vascular bundles, tendons, and nerve sheaths, foreign body extraction may be successfully completed with little risk of harm to surrounding tissue and may obviate the need for surgical exploration. Additionally, the ability to promptly remove foreign bodies in circumstances where access to medical care is limited or delayed helps to decrease the risk and associated costs of infection, pain, and multiple hospital visits.
Recently, point-of-care ultrasonography has become a portable technology for use in many pre-hospital and austere environments, with various applications,
6
Use of ultrasound by emergency medical services: a review.
Int J Emerg Med. 2008; 1: 253-259
although factors such as size, weight, and battery life may limit its use to nonmobile base camp settings.
7
Ultrasound for high altitude research.
Ultrasound Med Biol. 2012; 38: 1-12
The recent introduction of ultracompact machines, however, may allow providers to use them on expeditions or moving missions. The Vscan (General Electric, Fairfield, Connecticut), for example, weighs only 390 g and is approximately the size of a mobile phone.
Because of the increasing miniaturization of ultrasonography units, we suggest that foreign body removal using handheld machines is both feasible and advantageous in reducing the morbidity associated with retained foreign objects. Therefore, medical staff experienced in the use of ultrasonography might consider carrying a handheld unit along with medical field kits when embarking on wilderness expeditions. Additionally, medical base camp sites may find that handheld ultrasonography units are also a useful tool for on-site medical management, particularly in locations where immediate transportation to an adequate medical center may not be possible.