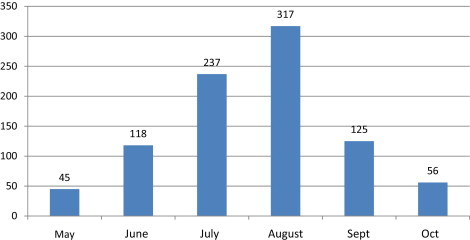 The Epidemiology of Mountain Bike Park Injuries at the Whistler Bike Park, British Columbia (BC), Canada

To describe the epidemiology of injuries sustained during the 2009 season at Whistler Mountain Bike Park.

A retrospective chart review was performed of injured bike park cyclists presenting to the Whistler Health Clinic between May 16 and October 12, 2009.

Mountain bikers incurred many injuries with significant morbidity while riding in the Whistler Mountain Bike Park in 2009. Although exposure information is unavailable, these findings demonstrate serious risks associated with this sport and highlight the need for continued research into appropriate safety equipment and risk avoidance measures.

The sport of mountain biking has grown significantly from its inception more than 30 years ago and is now a mainstream activity with worldwide participation on both recreational and professional levels. In 2009, nearly 28% of more than 38 million Americans who regularly bicycled were riding mountain bikes.
1
Outdoor Foundation, Boulder, CO
Outdoor Recreation Participation Report 2010.
http://www.outdoorfoundation.org/research.participation.2010.html
Mountain biking in which the rider navigates down steep slopes and technical terrain with manmade jumps, gaps, and obstacles, also referred to as “free-riding,” has become very popular, accounting for almost 50% of the total participation in some off-road cycling events.
2
Mountain biking injuries: an update.
Sports Med. 2002; 32: 523-537
The popularity of this style of riding has been spurred by the development of lift-accessed mountain biking in which participants make summertime use of chairlifts at ski resorts to gain access to longer and more technical terrain. Lift-accessed mountain biking enables riders to increase the amount of downhill riding they can do in a given day while minimizing laborious uphill climbs.
As of the 2011 season, at least 42 ski resorts across the United States and Canada have opened their mountains to summer riding.
3
Wikipedia
Lift Accessed Mountain Biking.
http://en.wikipedia.org/wiki/Lift_accessed_mountain_biking
Operating seasons for such locations are nearly 5 months long, and resorts are expanding access and building more technical terrain, including larger jumps and drops as well as steeper and rougher descents.
4
Ski Channel News
Deer Valley expanded biking and hiking trail access now open.
http://www.theskichannel.com/news/skinews/20110627/Deer-Valley-expanded-biking-and-hiking-trail-access-now-OPEN
,
5
Alyeska Resort, Alaska. Alaska Biking
http://www.alyeskaresort.com/events-activities/summer-biking.aspx
Advances in equipment, rider skill sets, and increased participation in the sport have increased the number of people exposed to the risk of injury.
6
Mountain biking injuries: a review.
Br Med Bull. 2008; 85: 101-112
,
7
Acute injuries from mountain biking.
West J Med. 1993; 159: 145-148
,
8
Mechanisms of injury in competitive off-road bicycling.
Wilderness Environ Med. 2002; 13: 27-30
,
9
Spinal column and spinal cord injuries in mountain bikers: a 13-year review.
Am J Sports Med. 2010; 38: 1647-1652
,
10
Mountain biking injuries requiring trauma center admission: a 10-year regional trauma system experience.
J Trauma. 2006; 60: 312-318
,
11
Acute injuries in cross-country and downhill off-road bicycle racing.
Med Sci Sports Exerc. 1996; 28 ((): 1351-1355
In addition, the ease of access to difficult terrain provided by the lifts likely increases each rider's exposure to high-speed complex terrain and may therefore increase the injury risk per descent as well as the number of descents per day.
Because lift-accessed downhill mountain biking is a relatively new sport, research on its associated risks has been quite limited; we could find no reports of injuries occurring during lift-accessed downhill biking in a recent PubMed search. Understanding the epidemiology of injuries associated with the sport could lead to improvements in sport-specific protective gear as well as more appropriate staffing, training, and resources for mountain-based bike patrols and nearby medical care providers. The objective of this study was to evaluate the types and extents of injuries occurring during one season at a downhill bike park that is serviced by a single emergency care clinic in Whistler, British Columbia (BC).

The Whistler Blackcomb Mountain Bike Park in Whistler, BC, has 3 lifts offering riders access to 45 trails totaling more than 250 km in length and more than 1175 m of vertical height. Trails range in difficulty from beginner (17%) to intermediate (23%) to expert (60%). There are wide green trails without manmade structures that flow smoothly downhill around broad, banked turns and are just steep enough to eliminate the need to pedal for the entire length of the trail. Black trails (usually ridden at much higher speeds) contain multiple manmade jumps, some of which allow a rider to easily gain 8 feet of vertical air and 10 to 15 feet of horizontal distance. Other trails are more technical but slower speed; steeper with large sections of rocks and roots with off-camber sections. Most of the trails fall somewhere in between, with a mix of jumps, rock rolls, drops, and rocky or root-filled sections. Access to the mountain generally runs from mid-May through mid-October, with hours ranging from 10 am to 5 pm in the early and late season and until 8 pm during the peak summer season. Park riders are required to wear helmets and use bikes with a minimum wheel diameter of 24 inches, and must be at least 6 years of age. Although not required, full face shield helmets as well as additional body armor are strongly encouraged.
Much like their winter ski operations, the park hires a trail crew to maintain the trails in safe condition and a bike patrol of emergency medical technicians (EMTs) to stabilize and transport injured riders off the mountain. Unless emergent helicopter rescue is required directly from the mountain, all individuals who are injured while riding in the park and require physician evaluation are transported to the single, centrally located urgent care center in Whistler village (the Whistler Health Clinic), located 1 km from the base of the mountain. Injured riders may refuse transport from the bike patrol and may self-refer without the bike patrol's involvement. There may also be agreement between the two that physician level care is unnecessary. The Whistler clinic is staffed by physicians who are mostly family physicians with 1 year of extra training in emergency medicine (FP/EM). One is Royal College trained and certified FRCP (C) in Emergency Medicine. One or two are general practitioners who have been working in the urgent care clinic for more than 20 years. The clinic has x-ray capability and can provide wound care, splinting, and other patient-stabilizing forms of care, but did not have a computed tomography scanner during the period of this study in 2009. Patients requiring a higher level of care for their injuries are transported by private vehicle, ground ambulance, or air to one of the major metropolitan hospitals in Vancouver, BC, more than 120 km away. No data are available about patients transported by helicopter directly from the mountain, those who were treated and released by the bike patrol team, or those who may have gone home to seek medical attention.

A retrospective chart review was performed for all patients admitted to the Whistler Health Clinic for injuries incurred while riding in the bike park during the full 2009 Whistler Bike Park operating season, between May 16 and October 12, 2009. Patients injured while riding in the bike park are categorized as “bike park” injuries in their electronic records; only visits with that designation were included. For each case, the patient's medical record was reviewed, and data were hand extracted by a single researcher. Data collected included month, day, day of week, time of triage, age, gender, home country, zip or postal code, mode of arrival (ambulance, park first aid vehicle, walk in, other), triage category using the Canadian Triage and Acuity Scale (CTAS),
12
CTAS National Working Group
Revisions to the Canadian Emergency Department Triage and Acuity Scale (CTAS) adult guidelines.
CJEM. 2008; 10: 136-151
the first 5 diagnostic codes, radiographic findings, disposition (discharge, ground/air transfer, death), and charges. The note narrative was also reviewed. No data were available about park usage during this period.
Frequency analysis and the relationship of visits and visit-severity to demographics and day of week were analyzed using SPSS (version 17.0; SPSS Inc, Chicago, IL).
13
IBM SPSS
http://www-01.ibm.com/software/analytics/spss/
This study was approved by the institutional review boards of The George Washington University and the University of British Columbia and by the Information Privacy Office of the Vancouver Coastal Health Authority.

A total of 910 patient files were reviewed for this study, with 12 patients excluded, leaving 898 (98.7%) with acute injuries for analysis. The excluded patients included 1 case of an allergic reaction attributable to an insect sting, 1 revisit for wound dehiscence, 1 patient with dehydration, 2 for late wound infections, a single visit for an overuse injury (shoulder bursitis), and 6 patients who left without being seen. Of the 898 subject visits, 86% (772) of the patients were male. The median age was 26 years (quartiles 19, 26, 34), ranging from 7 to 66 years. Canadian residents made up 68.7% (617) of the total, with 42% (259) residing in British Columbia and 13.8% (85) of the total specifically from the Resort Municipality of Whistler. Of the 281 non-Canadian residents, 48.8% (137) were US residents, 16.0% (45) were from Great Britain, 8.2% (23) were from Australia, 4.3% (12) were from Germany, and 3.9% (11) were from New Zealand. The rest of the injured resided across the globe from Japan to Liechtenstein.
Seasonally, clinic visits peaked in August when 35% of all injury cases visits presented (see the Figure). Visits on Saturday and Sunday (28.6% of the week) accounted for 39.5% of all injuries. Independent of the specific day, clinic arrival times peaked in early afternoon, with 52.3% of cases (470) registering between the hours of 1:00 pm and 4:00 pm.
The majority of patients arrived at the clinic ambulatory (79.8%, 717). Less than 1% (0.6%, 5) were carried, 8.0% (72) arrived on a stretcher, and 11.6% (104) entered in a wheelchair. Most patients, 52.2% (469), arrived alone, 20.0% (180) were accompanied by friends or family members, 19.4% (174) were escorted by the Whistler Bike Patrol, and 8.4% (75) arrived by emergency medical services. Only 4 visits were recorded to have resulted from bike-to-bike or person-to-bike collisions; the remaining visits were the result of the rider falling while riding.
The CTAS is mandatory for Canadian emergency departments and is used at Whistler to triage clinic patients during the initial nursing evaluation.
12
CTAS National Working Group
Revisions to the Canadian Emergency Department Triage and Acuity Scale (CTAS) adult guidelines.
CJEM. 2008; 10: 136-151
Table 1 presents these results.
Table 1Patients' triage severity
A total of 1759 specific injury diagnoses were identified for the 898 cases. At discharge, 43.3% (389) had only 1 injury diagnosed, whereas 4% (40) received the maximum of 5 separate diagnoses. A total of 445 fractures were identified in 382 patients (Table 2). Upper extremity fractures predominated with a total of 330 (74.2% of all fractures). In addition to fractures, injuries included abrasions in 518 individuals, sprains or strains in 255 individuals, 101 (11.2%) individuals with a traumatic brain injury (including 8 who had decreased level of consciousness on arrival), 32 patients with at least 1 rib fracture, and 12 pneumothoraces, but only 1 documented hemopneumothorax. In addition, 27 patients were transferred to another facility because of suspected internal abdominal trauma.
Table 2Fractures by body region and location
Regarding protective gear, 95.1% (854) of patient charts had no documentation on the use of additional pads or armor beyond the mandatory helmet. Of the 24 remaining cases, 1 was documented as not wearing armor; the rest (23) were documented as wearing a variety of protective devices beyond a helmet, including knee and elbow pads as well as full body protective suits and neck guards.
The disposition was missing for 7 cases. Of the total 898 patients, 90.5% (813) were discharged from the clinic, and 8.5% (76) were transferred to a higher level of care. Two of these were transferred by helicopter to a children's trauma center (a 12-year-old with suspected intraabdominal bleeding and a 10-year-old with a thoracic spine injury who was neurologically intact). Seven more were taken to a level 1 trauma center by helicopter (Table 3). Five traveled by personal vehicle. An additional 6.9% (62) were transferred to a higher level of care by ambulance, whereas the remaining 2 refused transfer (1 with no cervical fractures but abnormal cervical spine alignment without cord injury and 1 with a concern for intraabdominal bleeding).
Table 3Adults transferred by helicopter
The fees incurred as a result of treatment for the above injuries varied widely. BC residents are not charged directly for medical care at the Whistler Clinic (n=259). Canadians residing outside of the province are charged a flat fee of C$238 (n=358). Among non-Canadians (3 missing), the median charge was C$969.68 with a minimum of C$301.05 and a maximum of C$2669.60.