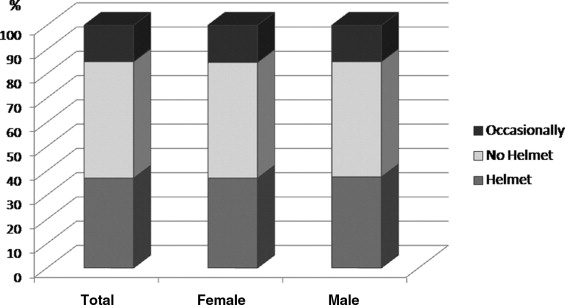 Risk-taking Behavior in Skiing Among Helmet Wearers and Nonwearers

To examine differences in on-the-snow ski behavior between helmet wearers and nonwearers.

The data were collected using a survey. Several tourist agencies helped in administrating the survey to the skiers during the 2008–2009 and 2009–2010 seasons. The survey consisted of multiple-choice questions. The subjects were asked to choose answers most suitable for their skiing style and preferred skiing technique, volume of off-piste skiing, readiness to use time measuring systems on the slopes, and group-skiing preferences, such as leading the group, beside the group, away from the group, etc. The Risk Index was then calculated for each subject.

The answers of 710 skiers (mean age 35.5, range 16–81 years) were analyzed. The predictive power for risk-taking behavior was tested for gender, age, educational level, level of skiing, years of skiing, and helmet usage. Younger age, male gender, higher skiing level, and helmet usage were used as independent predictors for the overall Risk Index (Power [1-β err prob] = 0.942). Significantly higher risk was assessed for the male helmet wearers while the results were not significant for the female helmet wearers. The male occasional helmet wearers were found to be the most prone to risky behavior. In female nonhelmet wearers, there was a significant decrease in risk-taking behavior with age but this was not true for female helmet wearers.

For males under 35 years of age, helmet use is one of the factors influencing risk-taking on the slopes. This is demonstrated for occasional helmet wearers in particular.

Of all ski injuries, the most dangerous occurring on the slopes are of the head. Therefore, it is understandable that wearing a ski helmet is widely recommended by many experts as effective protection against head injuries.
1
Helmets for snow sports: prevalence, trends, predictors and attitudes to use.
J Trauma. 2010; 69: 1486-1490
,
2
Pilot study of adolescent attitudes regarding ski or snowboard helmet use.
WMJ. 2010; 109: 28-30
,
3
The effect of helmets on the risk of head and neck injuries among skiers and snowboarders: a meta-analysis.
CMAJ. 2010; 182: 333-340
,
4
Helmet use and risk of head injuries in alpine skiers and snowboarders.
JAMA. 2006; 295: 919-924
Moreover, some experts have suggested that wearing a ski helmet on the slopes
5
Mandatory ski helmets?.
CMAJ. 2010; 182: 942
should be mandatory, especially for children and juvenile skiers.
6
Safety requirements and risk factors of skiers and snowboarders.
Sportverletz Sportschaden. 2009; 23: 41-46
The amount of protection against traumatic brain injury provided by a ski helmet diminishes at higher speeds on an open slope.
7
Speeds associated with skiing and snowboarding.
Wilderness Environ Med. 2007; 18: 102-105
It is also known that riskier skiing activities, usually occurring in terrain parks, are related to increasing risk of head injury, regardless of helmet use.
8
Skiing and snowboarding head injuries in 2 areas of the United States.
Wilderness Environ Med. 2009; 20: 234-238
For the above-mentioned reasons, one may speculate that any skiing activity in which skiers push themselves beyond their abilities might lead to higher rates of injuries despite helmet usage.
9
Skiing helmets.
Br J Sports Med. 1999; 33: 3
It has also been observed that wearing a ski helmet does not reduce fatalities on the slopes, since 35% of skiers who have died were wearing a helmet, which is a much higher rate than the rate of helmet usage among the general population of skiers.
10
On piste fatalities in recreational snow sports in the U.S..
Journal of ASTM International. 2006; 3 (Accessed February 5, 2009): 5
www.astm.org/JOURNALS/JAI/PAGES/JAI13893.htm
This statistic raises the following question: do helmet wearers take more risk on the slopes by overestimating the protection power of the ski helmet and, consequently, does that risky behavior decrease the protective characteristics of the ski helmet?
Some researchers introduced the term “risk compensation theory” and have tried to investigate its presence in helmeted skiers.
11
Factors associated with self-reported risk-taking behaviour on ski slopes.
Br J Sports Med. 2010; 44: 204-206
,
12
Testing the risk compensation hypothesis for safety helmets in alpine skiing and snowboarding.
Inj Prev. 2007; 13: 173-177
It refers to the observation that some people tend to adjust their behavior in response to perceived changes in risk—for example, behaving less cautiously in situations where they feel “safer” or more protected. The findings of those studies were limited, since individual perception and psychological profile play a part in determining whether one would perceive his/her style of skiing as risky. That is why self-reported risk taking may not be a good indicator of actual risk behavior. In our opinion, a single direct question asking “Do you take more risk?” does not provide the best assessment of risky behavior. Following that reasoning, we have opted to test the risk compensation hypothesis by introducing more objective measures such as on-site exploration of skier behavior.
The objective of this study was to examine the differences in on-the-snow ski behavior between helmet wearers and nonwearers. The second goal was to determine the percentage of ski helmet usage and to explore reasons that contribute to the decision whether or not to wear a helmet.

Data were collected using a survey administered to Croatian skiers during the 2008–2009 and 2009–2010 seasons with the help of several tourist agencies. The survey showed acceptable test-retest reliability across 30 days on a pilot sample of 50 skiers (r = 0.87, P < .001). The sample size calculations showed that, for the Power of 99% and Type I statistical error of 0.001, the sample in the control group (without helmets) should be over 393 and, in the experimental group (with helmets), over 192.
The subjects were not informed about the purpose of the study but were told that the survey aims to explore the skiing preferences and skiing style of Croatian skiers; helmet questions were placed at the end of the survey. The first part of the survey consisted of 5 multiple-choice questions that were filled in by all skiers. The participants were asked to choose answers most suitable for their skiing style regarding their preferred skiing technique, preferences regarding off-piste skiing, readiness to use time-measuring systems, and their behavior around a group of skiers (prefer skiing alone, leading the group, beside the group, and similar inquiries). Only consistent or occasional helmet wearers filled in the second part, consisting of 3 items. That part was comprised of questions regarding the reason for choosing a helmet, skiing behavior with a helmet, and questions about the feelings related to wearing a helmet. The general descriptive data of the sample like age, gender, level of skiing technique, number of skiing seasons in the past, as well as their level of education were also noted.

Three independent judges from the Croatian Association of Snow Sports Instructors (HZUTS), all members of the HZUTS Educational and Scientific Committee (2 of them also being sports medicine MDs), independently ranked the answers for each item according to the risk involved. The reliability of the judges was calculated by means of interclass coefficient of correlation (ICC) and the result was more than satisfactory (ICC = 0.93). Numeric values representing the level of risk-taking behavior in each question were then attributed to the ranked answers, and those values were rated on the Risk Index (ranging from 6 [low] to 21 [high]).
The obtained data were analyzed by Statistica (Tulsa, OK, USA) for Windows 9.0. The Kolmogorov-Smirnoff test showed that the distribution of the data did not significantly differ from a normal distribution, and we proceeded with the parametric statistical techniques. The student t test for independent samples and analysis of variance (ANOVA) were used to search for differences between the groups, and the multiple regression analysis was used to identify factors that might have the predictive power for the Risk Indices. The P-value significance threshold was set at P < .05.

The total number of subjects was 710, with average age of 35.5 ± 11.56 (range of 16–81 years; male = 494, female = 216). The sampled skiers were well educated: 0.88% finished only elementary school, 32.39% high school, 54.08% had a university degree, and 12.25% had a Master of Science or PhD degree. This sample is representative of the Croatian skiing population, which usually comes from higher socio-economic backgrounds. The mean number of skiing seasons was 18.26 ± 7.9, while their self-reported skiing knowledge average was 4.50 ± 1.52 on a scale from 1 (very poor or only 1 season of skiing) to 7 (ski teacher or ski demonstrator).
Out of the total sample (N = 710), 48% of the subjects did not wear a helmet, 15% wore one occasionally, and 37% reported that they always wore a helmet. No statistically significant differences were observed in helmet usage between the genders (Figure 1).
The Risk Indices were then calculated. Prior to the calculation of the Risk Indices, the inter-rater reliability of the judges who evaluated the riskiness in answers was calculated by means of interclass coefficient of correlation and was more than satisfactory (ICC = 0.93). The Risk Index results showed a higher risk assessment in male helmet wearers that was not seen in the female population (13.43 ± 2.74 vs 12.43 ± 2.56; P < .001) (Table 1). When the sample was divided into 3 groups according to helmet usage, the occasional helmet wearers were found to be the most prone to risky behavior on the slopes (Figure 2).
Table 1The results of the Student t tests for independent samples comparing Risk Index between the helmet wearers and nonwearers (the occasional helmet wearers were added to the helmet wearers)
The predictive power for Risk Index was tested for several variables, including gender, age, educational level, level of skiing, years of skiing, and helmet usage. The regression analysis identified younger age, male gender, higher skiing level, and helmet usage as independent predictors for the overall Risk Index (effect size f2 = 0.02; Power [1- β err prob] = 0.942).
The more skilled skiers took more risk (r = .41, P < .001) but, interestingly, no significant negative correlation was found between skiing skills and experience and the helmet usage (r = −.08 and r = −.17 respectively). Based on that result, we may conclude that helmets are being used similarly by experienced and nonexperienced skiers, which excludes the possibility that the differences in Risk Indices between helmet wearers and nonwearers originates from better skiing skills in helmeted skiers.
In male helmeted skiers, the highest Risk Index was found in the age group below 35 years of age. One interesting observation was the lack of decline in Risk Index with age in helmeted female skiers, meaning older female skiers with helmets continued to take more risks on the slopes than their nonhelmeted counterparts (Figure 3a and 3b). That was not the case in male skiers (Figure 3c and 3d).
As expected, there were significant variations in answers to individual items according to sex and age. Male skiers wearing helmets were significantly more prone to “carving” technique no matter the conditions of the slope and number of other skiers.
Younger male skiers with helmets expressed significantly higher interest in using the slopes with time-measuring systems as well as the possibility of jumping from moguls on the slope. Men under 35 years reported more often that they like to ski alone or lead the group and resented skiing in a group by following someone. Twenty-four percent of the helmet wearers reported the feeling of increased security and faster skiing with helmet usage and 75% claimed they skied the same as without a helmet. Thirty-six percent of subjects perceived skiing with a helmet as a lower death risk, and 27% reported reduced hearing abilities as well as visual impairment while wearing a helmet (10%).