DOI:https://doi.org/10.1016/j.wem.2010.06.004
Recommendations on the Use of Epinephrine in Outdoor Education and Wilderness Settings
Next ArticleEffectors of Visual Search Efficacy on the Allegheny Plateau

The Epinephrine Roundtable took place on July 27, 2008 during the 25th Annual Meeting of the Wilderness Medical Society (WMS) in Snowmass, CO. The panelists were, in alphabetical order: The WMS convened this roundtable to explore areas of consensus and uncertainty in the field treatment of anaphylaxis. There is a paucity of data that address the treatment of anaphylaxis in the wilderness. Anaphylaxis is a rare disease, with a sudden onset and drastic course that does not lend itself to study in randomized, controlled trials. Therefore, the panel endorsed the following position based on the limited available evidence, as well as expert consensus. The position represents the consensus of the panelists and is endorsed by the WMS. The field treatment of anaphylaxis with injected epinephrine can be a life-saving procedure. This is true especially when access to standard medical care will be delayed due to weather or geography. We therefore support the concept that properly trained, non-medical professionals, whose work responsibilities require them to provide emergency medical care, be trained to appropriately administer epinephrine for the treatment of anaphylaxis.Organizations that choose this expanded scope of practice for their staff should consult with legal counsel. The relevant laws and regulations vary from state to state. Where such practice is not supported by legislation, we encourage and support all efforts to change existing laws or introduce legislation supportive of this concept.The following should be included in the organization's operating procedures and staff training curriculum: Notable points of the roundtable discussion are presented below for general interest. We have included sample protocols from 3 outdoor schools on the field use of epinephrine and an edited transcript of the roundtable discussion as appendices to this article. They are available on line at www.wemjournal.org.

For decades, established schools in outdoor education have been carrying epinephrine into the field to treat the rare but potentially life-threatening condition of anaphylaxis. Recently, the legality of this practice has been questioned. Is it legal for a physician to write a prescription for an organization rather than a specific individual? Moreover, is it legal for a non-medical professional with first-aid training to administer epinephrine, an injected medication, in a medical emergency? The law on these questions varies state by state. For example, in North Carolina, physicians legally may train lay people to administer epinephrine in the field.
1

In New York State, teachers and camp counselors may also administer epinephrine after appropriate training.
2
http://www.health.state.ny.us/nysdoh/ems/camp_epipen.htm/
In other states, there are strict prohibitions on such administration. The prohibited administration of a prescription drug may be considered negligence even if the intent of the layperson was to help the patient. Furthermore, malpractice insurance excludes coverage of an illegal act.

Incidence of Anaphylaxis in the General Public and in Outdoor Education

There are approximately 150 recognized anaphylactic deaths from food allergies or insect stings per year in the United States.
3
AAAAI Board of Directors
Anaphylaxis in schools and other childcare settings.
J Allergy Clin Immunol. 1998; 102: 173-176
Lack of recognition may be associated with underdiagnosis of anaphylaxis. The majority of anaphylaxis fatalities are due to food allergies, especially those in adolescents and young adults, and asthma is a risk factor for fatal anaphylaxis.
4
Fatalities due to anaphylactic reactions to foods.
J Allergy Clin Immunol. 2001; 107: 191-193
If medications are considered along with food allergies and insect stings as causes of fatal anaphylaxis, then there are about 1500 deaths per year.
5
Anaphylaxis in the United States: an investigation into its epidemiology.
Arch Intern Med. 2001; 161: 15-21
Medication-induced fatal anaphylaxis on average occurs in an older, adult population—often in hospital or healthcare settings. Besides medications, foods, and insect stings, anaphylaxis may also be induced by cold temperatures and by exercise. Overall, the risk of anaphylaxis in the general population is estimated at .05% to 2%, with a smaller percentage at risk for fatal anaphylaxis.
6
Epidemiology of Anaphylaxis.
Ann Allergy Asthma Immunol. 2006; 97: 596-602
In life-threatening anaphylaxis, there is no absolute contraindication to properly dosed epinephrine from a vial or ampoule. The NOLS database records 2 cases of anaphylaxis in 20 years (2.5 million participant-days). In contrast, during the same period, NOLS also records 149 cases of acute allergic reactions. Retrospective review of the NOLS data reveals that instructors appropriately administered epinephrine in the 2 cases of anaphylaxis and an anti-histamine in the 149 cases of acute allergic reactions.
7

There were no deaths among the cases of anaphylaxis or acute allergic reactions.

Epinephrine may be administered by auto-injector into the anterior-lateral, mid-thigh. This method minimizes the possibility of dosage error and reliably achieves effective serum drug concentration; 0.3 to 0.5 ml of the 1:1000 concentration of epinephrine may also be manually drawn from a vial or ampoule into a syringe with an attached needle and administered intramuscularly over the anterior-lateral, mid-thigh. This method is far less expensive than using an auto-injector and also achieves effective serum drug concentration but is more prone to operator error. Injection into the anterior-lateral, mid-thigh by either method achieves higher serum drug concentration than intramuscular or subcutaneous injection into the deltoid.
8
Epinephrine absorption in adults: intramuscular versus subcutaneous injection.
J Allergy Clin Immunol. 2001; 108: 871-873
In addition, auto-injectors can administer epinephrine through clothing. Regardless of the delivery method, 25% to 35% of anaphylaxis victims require a second dose.
9
Anaphylaxis: can we tell who is at risk of a fatal reaction?.
Curr Opin Allergy Clin Immunol. 2004; 4: 285-290

An outdoor organization with responsibility for students at risk for anaphylaxis—particularly children with asthma or food allergies, who may also be a long way from help—should require that such students carry personal auto-injectors. However, a back-up system is necessary because even the simple auto-injector is not so simple to use when a patient is in extremis. Therefore, outdoor instructors also should be trained to administer epinephrine. Legal protection for this rests on having each state legislature or medical board approve the field administration of epinephrine by trained outdoor instructors. In time, legislative change on the federal level should establish uniform protection in all 50 states. It may take parents who have lost a child to anaphylaxis because epinephrine was not available to push through changes in state and federal laws, as happened in the Canadian school system with Sabrina's Law.
13
http://www.edu.gov.on.ca/eng/healthyschools/anaphylaxis.html
The relevant law need only say that field administration of epinephrine is an approved practice and that physicians may train others to administer it. In North Carolina, for example, the law specifies that a physician must provide training on matters such as the definition, causes, symptoms, and treatment of anaphylaxis. The law need not require one method of administration over another—it may leave this issue to the discretion of the physician providing the training. Furthermore, the law would specify that a layperson may provide treatment only if a licensed medical provider is not on scene.
In summary, the roundtable panel endorsed the field administration of epinephrine under emergency conditions by wilderness instructors who have received adequate training in the field recognition and treatment of anaphylaxis. 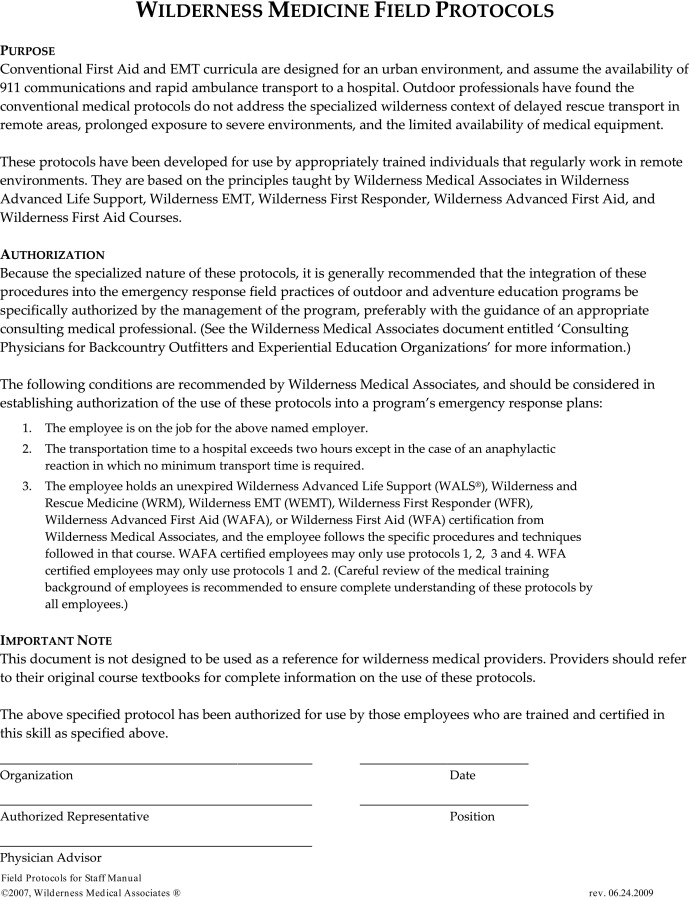 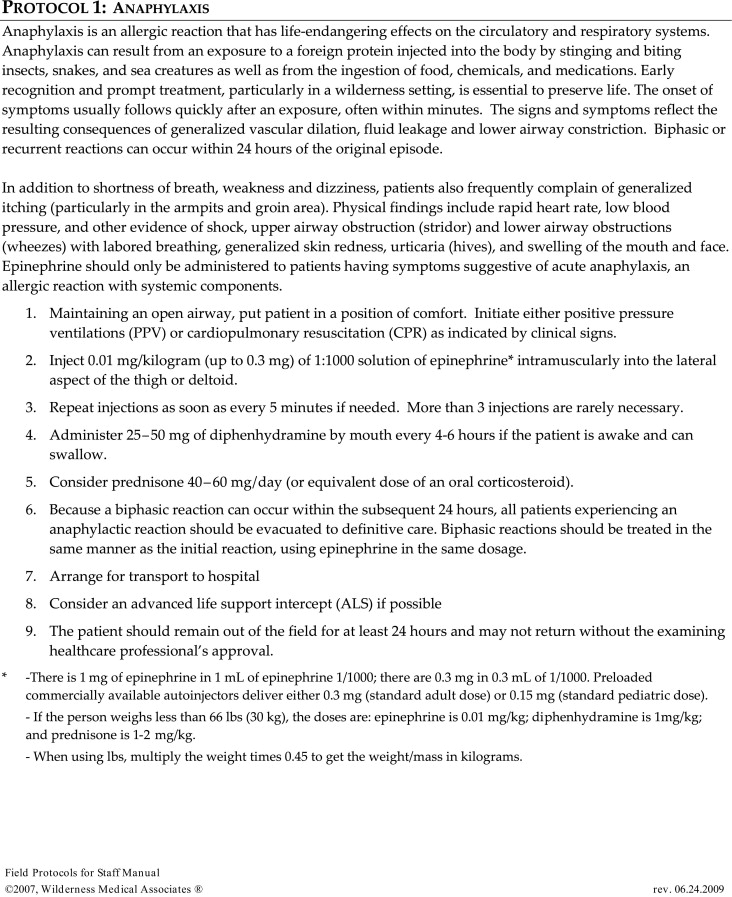 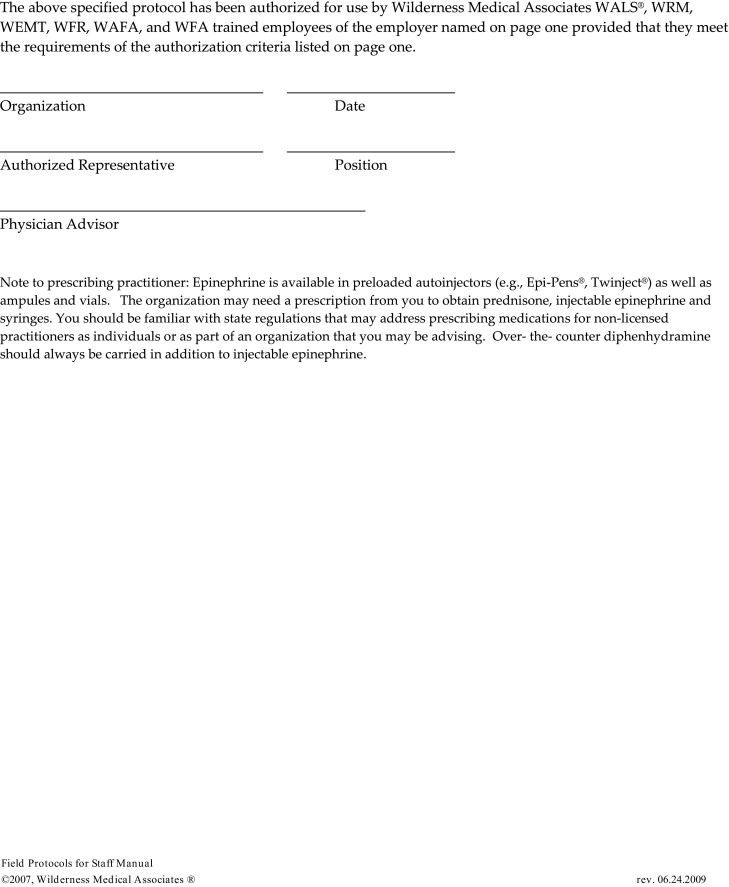 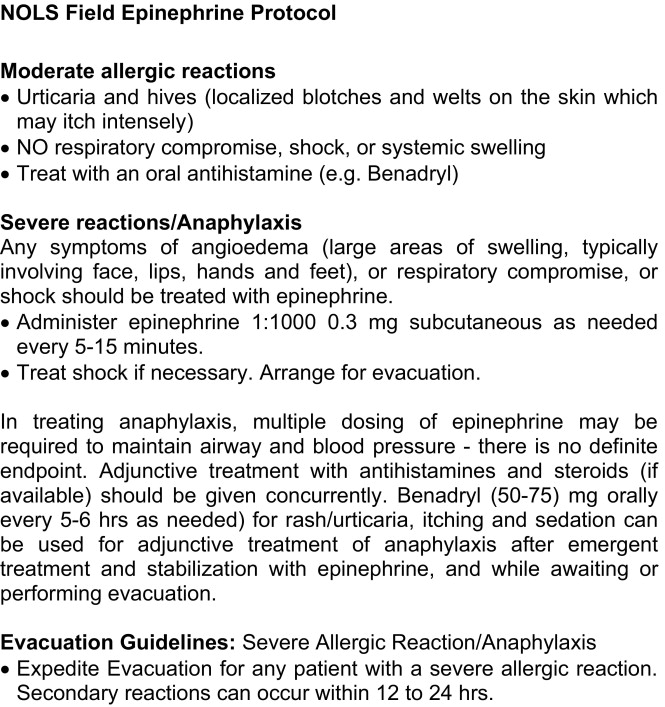 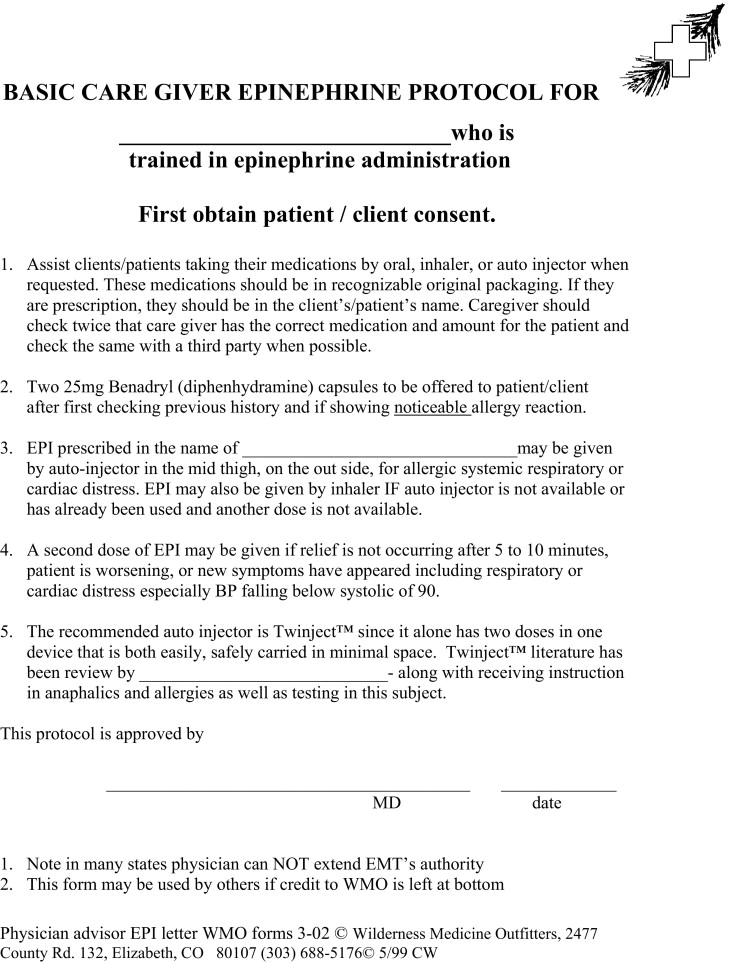 Appendix D. Edited transcript of the “Panel Discussion on the Use of Epinephrine in Outdoor Education and Wilderness Settings” at the 25th Wilderness Medical Society Annual Meeting 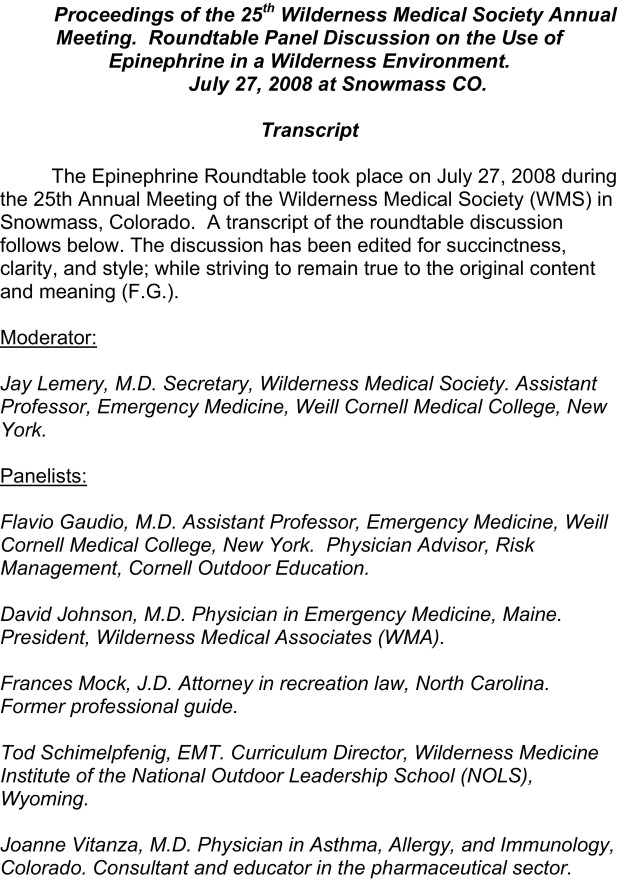 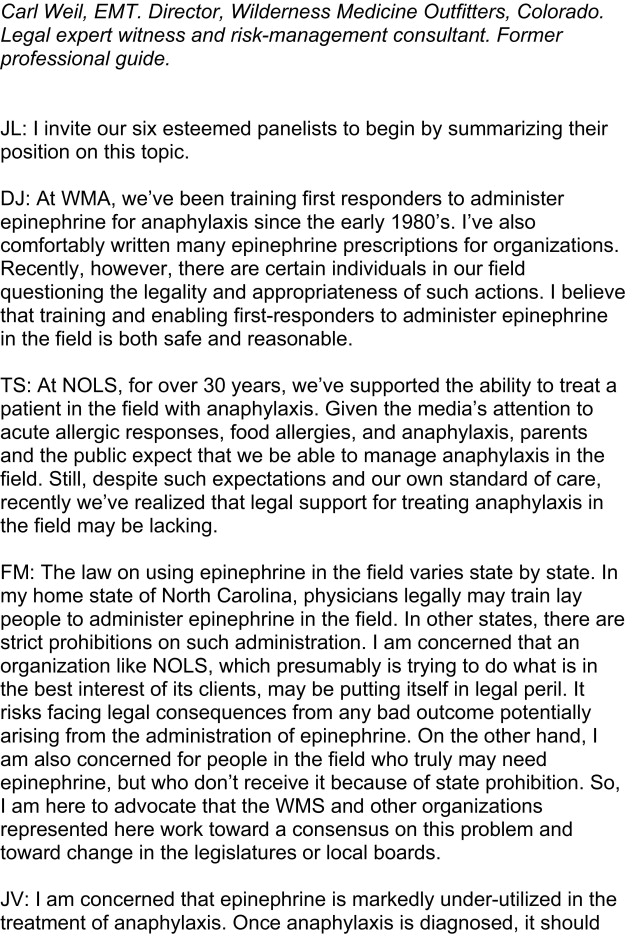 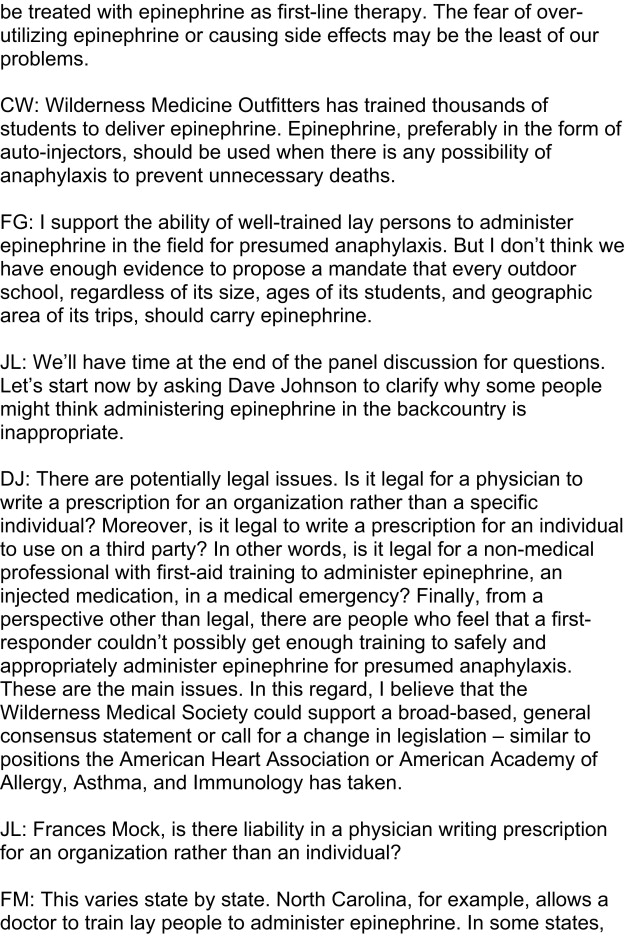 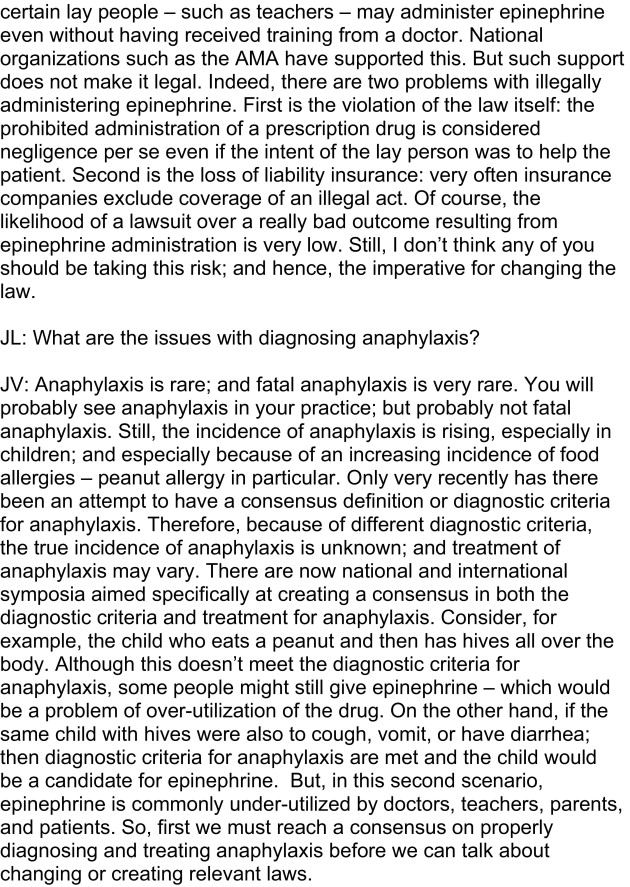 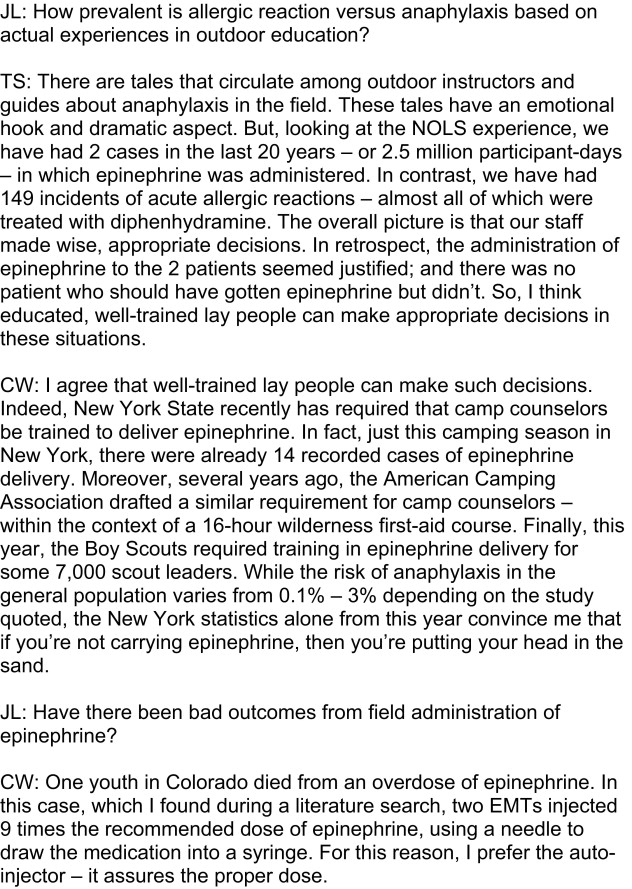 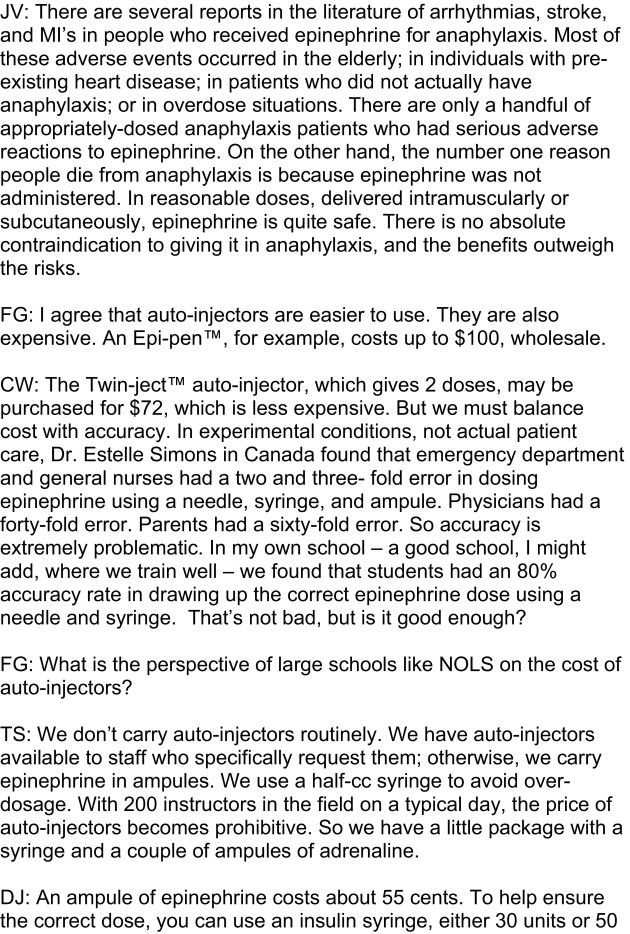 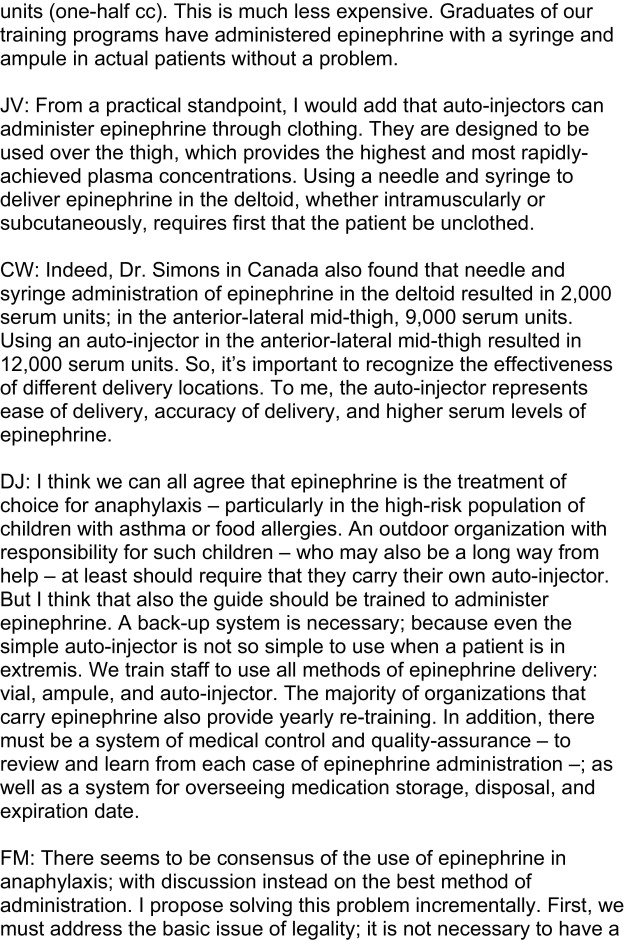 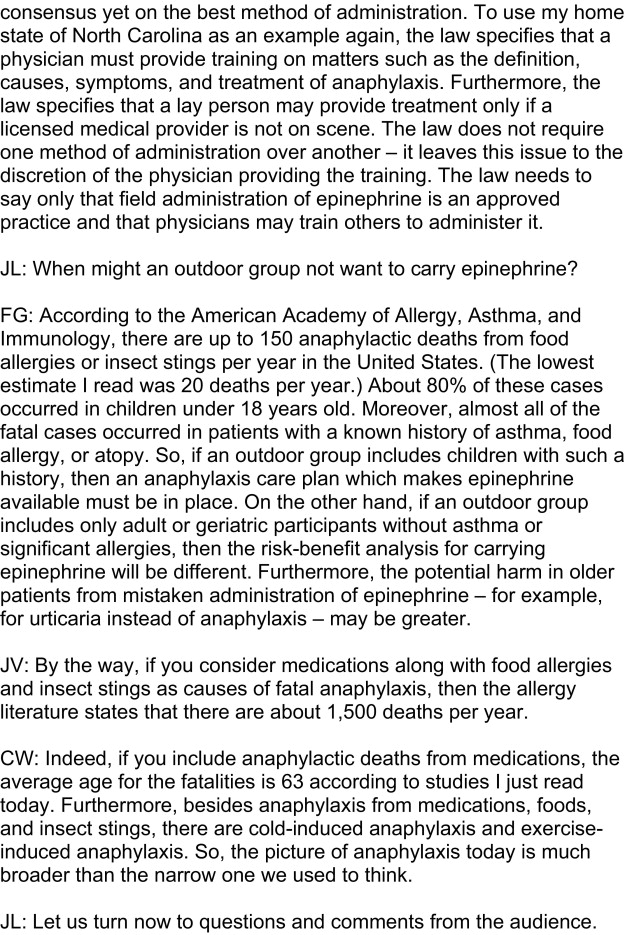 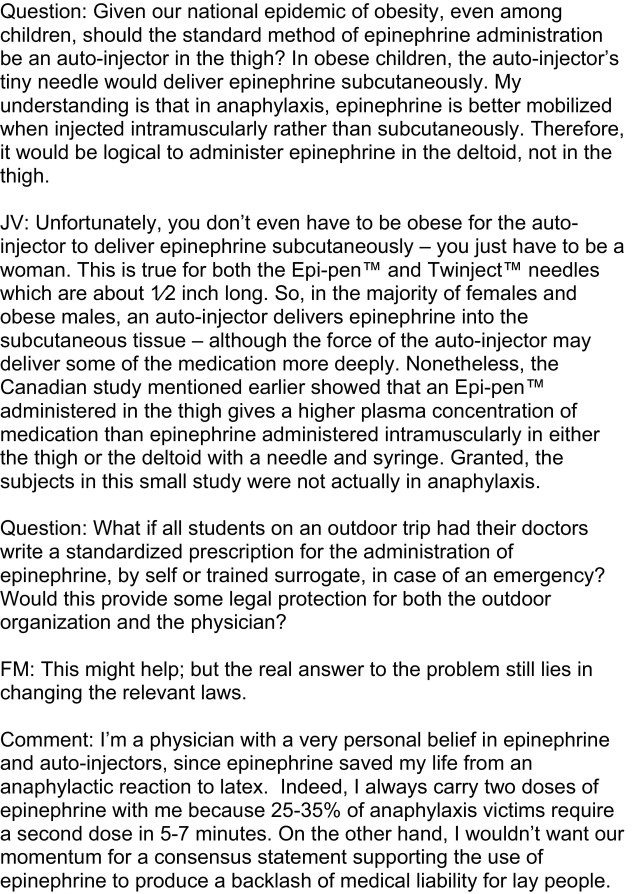 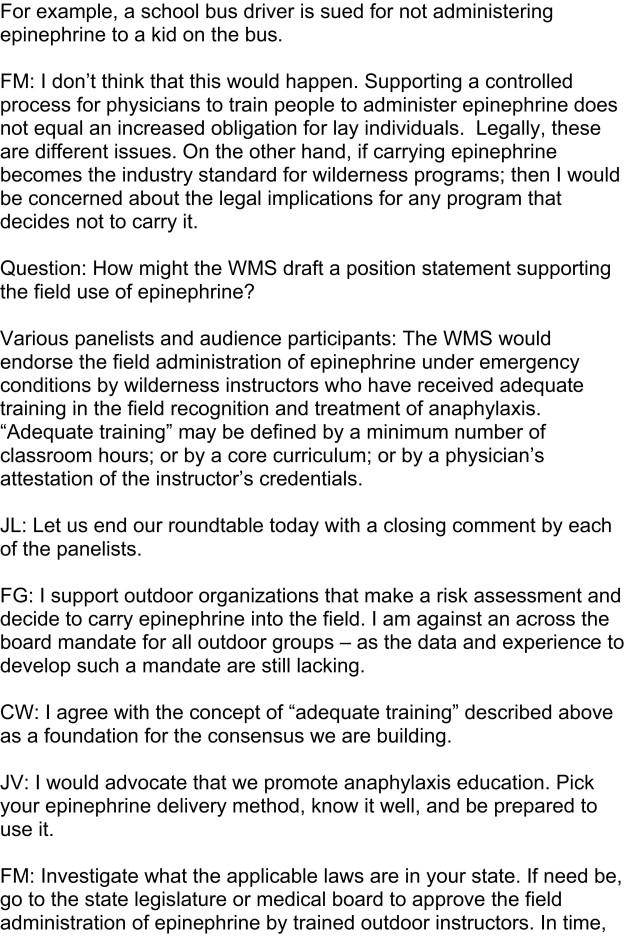 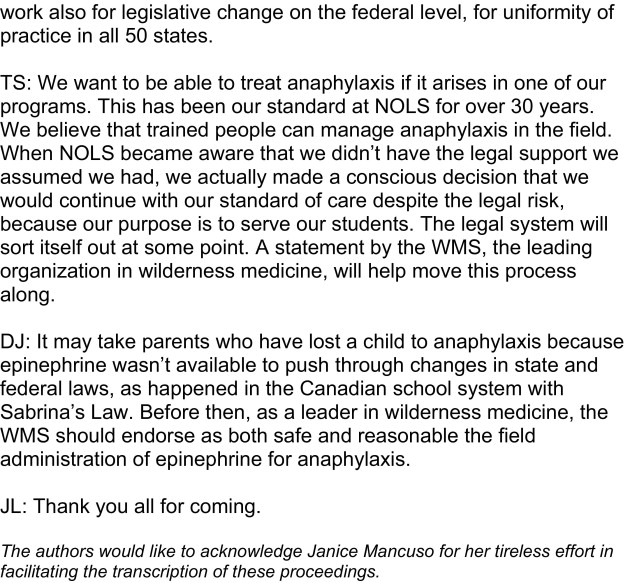