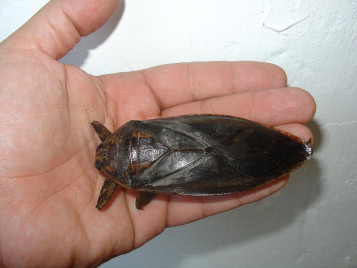 We report 7 cases of patients bitten by giant water bugs, large predatory insects belonging to the Belostomatidae family (Hemiptera, Heteroptera). These insects have toxic saliva capable of provoking intense pain and paralysis in vertebrates. Victims experienced intense, excruciating pain and 1 manifested hypoesthesia in the forearm. Bites by Belostomatidae are often reported by clinicians working in areas where these insects live, but there are no detailed case reports in the medical literature. There are no specific treatment modalities known to be effective, making prevention an important strategy.

Venomous aquatic insects are rare, but arthropods of the Belostomatidae family can cause painful bites in humans.
1
Animais Aquáticos Potencialmente Perigosos do Brasil: Guia Médico e Biológico.
Editora Roca, São Paulo, Brazil2008
Belostomatidae is a family of the largest insects in the order Hemiptera, known as giant water bugs. They occur worldwide living in tropical, subtropical, and temperate areas, with most species in North and South America and East Asia. They are typically found in freshwater streams and ponds. Most species are relatively large (2 cm or more) with some of the largest, such as Lethocerus, exceeding 12 cm. The giant water bugs are classified into 3 main genera (Belostoma, Horvathinia and Lethocerus) and can cause painful bites, a fact that has led them to be named “toe-biters.”
2
Aquatic Entomology.
Science Books International, Boston, MA1981
Their bite is considered one of the most painful that can be inflicted by any insect. They are also known as “electric light bugs” as they are attracted to electric lights. Their large size and voracious predatory appetite make them one of the few important insect predators of vertebrate animals.
The true bugs of the Hemiptera order all practice extra-oral digestion and may be predaceous, phytophagous, granivorous, or ectoparasitic, or they may use combinations of several modes of feeding. The Belostomatidae are potentially important determinants of ecological community structure due to their large size, voracious predatory appetite, broad range of prey, and frequent high population density.
3
Behavioral interactions between the giant water bug (Belostoma lutarium) and tadpoles of Bufo woodhousii.
Southeast Nat. 2004; 3: 13-24
They can often be observed feeding on tadpoles, fish, and even animals as large as ducklings.
1
Animais Aquáticos Potencialmente Perigosos do Brasil: Guia Médico e Biológico.
Editora Roca, São Paulo, Brazil2008
,
2
Aquatic Entomology.
Science Books International, Boston, MA1981
Preying on snails, 3 species of the genus Belostoma (Heteroptera: Belostomatidae) may have a controlling effect on snail populations.
4
Predation potential of the water bugs Sphaerodema rusticum on the sewage snails Physa acuta.
Mem Inst Oswaldo Cruz. 2002; 97: 531-534
They breathe in water via a siphon tube extending from the rear and can be found hanging head down under the surface but are also highly capable swimmers.
2
Aquatic Entomology.
Science Books International, Boston, MA1981
These Hemiptera have popular names in Brazil, such as barata d′água (water cockroach), escorpião d′água (water scorpion), “arauembóia,” and “bota-mesa.”
These giant water bugs can be quite large; those from the genus Lethocerus can reach more than 12 cm in length. The main Lethocerus species in Brazil are L delpontei, L grandis, and L maximus (Figure 1).
Differences have been found in salivary enzyme composition between large and small species, Lethocerus uhleri, Lethocerinae and Belostoma lutarium, Belostomatinae, respectively. Saliva from L uhleri contains 3 proteolytic enzymes and no amylase, while the salivary gland of B lutarium produces 2 proteolytic enzymes and amylase.
5
The salivary gland and salivary enzymes of the giant waterbugs (Heteroptera; Belostomatidae).
Comp Biochem Physiol. 2006; 145: 114-122
Researchers attribute these differences in salivary enzyme composition to differences in diet preference between the Lethocerinae and Belostomatinae.
5
The salivary gland and salivary enzymes of the giant waterbugs (Heteroptera; Belostomatidae).
Comp Biochem Physiol. 2006; 145: 114-122
Giant water bugs have a short stout beak (proboscis), which is used to inject powerful digestive saliva into prey and suck out the liquefied remains
6
Natural history of the aquatic hemiptera.
http://faculty.ncf.edu/mccord/doc/NaturalHistoryAquaticHemiptera.doc
(Figure 2). Their saliva is a mix of enzymes capable of liquefying tissues, along with other toxic effects. Their saliva toxicity was studied by Picado,
7
Estudo experimental sobre o veneno de Lethocerus depontei (De Carlo) (Hemiptera, Belostomatidae).
Mem Inst Butantan. 1936; 10: 303-310
who reported “increased blood clotting in men and animals, more important hemolysis than in snake venom in rabbits but not man, and necrosis and bleeding in fish.” Recently, Cardoso et al demonstrated the presence of lysophospholipids in the saliva of Belostoma anurum, which can cause neuromuscular junction paralysis in prey.
8
Lysophoslipids from the saliva of the aquatic hemipteran predator Belostoma anurum cause prey paralisia.
Annals of the XVI World Congress of the IST and X Congresso da SBTx, Recife, Brazil2009
Despite these very painful bites, to our knowledge, there are no detailed reports in the literature regarding human injuries from Belostomatidae insects. We therefore present data on 7 human injuries caused by Belostomatidae in Brazil. The data were obtained by the authors after interviewing the patients.

Summary of the Cases

We observed 7 cases of bites by giant water bugs in humans over a period of 6 months, recorded in Southeast and Midwest regions of Brazil. Tables 1 and 2 describe the characteristics of the patients, the circumstances surrounding the bites, and their clinical courses. The cases were reported as having been caused by Belostomatidae, though in most cases the actual species was not identified by the patient. Two victims were observed at the time of the injury by the authors and the others had their clinical data recorded retrospectively, also by the authors. The reports were collected by active querying of individuals at risk for such exposure, and the majority of patients were ichthyologists who work in small water courses with frequent contact with giant water bugs.
Table 1Patient characteristics and circumstances
Table 2Clinical manifestations and course of the patients

The patients in this study were young individuals (9 to 30 years), and most (nearly 72% of the cases) were zoologists collecting small fish for field research in the small rivers and pools in which giant water bugs live. The bugs are occasionally found among collected fish. Two cases (28%) occurred in different situations, 1 in a child collecting tadpoles in a small river and another in an adult swimming in a manmade pool. Three zoologists (nearly 39% of the patients) recalled having been bitten on more than 1 occasion, again compatible with their activities.
In 6 cases insect identification was restricted to the level of family (Belastomatidae), but 1 specimen was identified as Lethocerus delpontei by the authors. The size of the insects varied between 3 and 10 cm.
Bite sites were on the hands and fingers in 5 cases (approximately 72% of the injuries). One patient was injured on the foot and another on the forearm. Bite location on the hands and fingers is consistent with zoologists doing field research and collecting fish and other aquatic animals.
Clinical manifestations of the bites re-enforced the toxic effects of salivary gland secretions in these insects. In all cases a red point was observed at the bite site with mild edema in 3 cases (42.9%) and massive edema in 1 (14,3 %), involving the entire extremity (Figure 3). The most important symptom was the intense, sometimes excruciating, pain, often described as pulsatile, and, in 2 cases, involving the entire limb.
In 1 case the victim presented with anesthesia followed by paresthesias in the bitten forearm, which faded 5 hours after the accident. Symptom and sign persistence varied from some minutes to 5 hours, and only 1 patient tried any treatment (antihistamines without benefit). All of the wounds healed without sequelae. It is likely that the intense pain experienced is related to the salivary enzymatic action, which can liquefy tissues.
Buruli ulcer is a disease caused by a mycobacterium (Mycobacterium ulcerans) that causes extensive ulceration mainly in the lower limbs. M ulcerans can be isolated from water bugs (Naucoridae, Belostomatidae, and Nepidae families) in endemic areas and can replicate in the salivary glands of these bugs. Whether or not this disease can be transmitted through bites by giant water bugs remains to be determined,
9
World Heath Organization
Buruli ulcer.
http://www.who.int/buruli/research/priorities/transmission/en/index.html
and it was not seen in any of our cases.
There has been no research done on management of these bites. Pain should be treated with analgesics, and tetanus immunization should be given as needed. Other measures that may be useful include washing the bite site, application of triple antibiotic ointment, and use of ice to reduce swelling. Conservative care is likely to yield an optimal outcome. Though these bites are painful and cause local reactions, they appear to resolve within 5 hours and without permanent sequelae. More work needs to be done to further assess the causes, severity, and treatment of giant water bug bites. Given the severity of the pain caused by these insects, prevention of bites should be encouraged.

Bites from giant water bugs are a risk in certain professional activities, such as field research zoologists. Clinical manifestations in victims are likely related to the enzymatic action of salivary secretions, which can digest tissue, and cause severe pain and possible local anesthesia.

The authors are grateful to the journalist Luiz Roberto de Souza Queiroz for his contributions to the text.