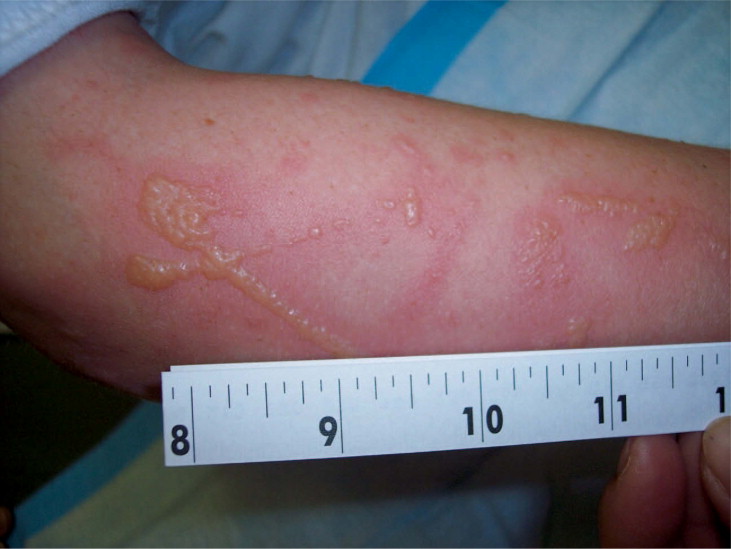 An 11-year-old boy presented in July 2006 to a clinic in Dutch Harbor, AK, complaining of painful reddened areas of both forearms. There was no history of fever, trauma, joint pains, or muscle aches. The patient was not ill. He had never had any similar eruptions in the past. Physical examination was normal, except for the rash (Figures 1 and 2). The day prior to presentation he had helped to clear weeds near his family's home with some other children, who developed mildly reddened skin on their forearms.
What is the diagnosis? What is the clinical course? What is the pathophysiology? How is it treated?

The patient's initial treatment consisted of ibuprofen, hydrocortisone 1% cream, and diphenhydramine. Three days after his initial presentation, he flew to Anchorage, AK, where he was seen in the Emergency Department (ED) of the Alaska Native Medical Center for worsening of the rash into tense, tender bullae (Figure 3). He still had no other symptoms. In the ED, the bullae were unroofed and dressed with silvadene cream and nonadhesive dressings. The patient was then referred to the surgical burn and wound care clinic and received physical therapy. He improved over the next several days with treatment consisting of Calmoseptine ointment and SAF-Gel hydrating dermal wound dressing with alginate. The areas of rash resolved slowly, much like a thermal burn, and remain hyperpigmented now, several months later.

Cow parsnip (Figure 4) (Heracleum lanatum Michx.), also known as hogweed and wild celery, is a member of the Apiaceae family (carrots, celery, parsnips, fennel, dill, parsley, Queen Anne's lace). In many parts of Alaska, it is known by a local name, “pushkie.” It is found in woodland and meadow areas of Canada and Alaska, and as far south as Georgia and Arizona, at elevations of 1200–3000 m. Its tall hollow stems are 1–2.5 m tall, and its broad leaves may be 10–30 cm across. In late summer, it produces white flowers in large flat compound umbels 15–30 cm across.
1.

Cow parsnip and many other plants produce furocoumarins to protect against fungal attack. It is these toxins that induce phytophotodermatitis, irritating the skin of susceptible people and causing blisters with exposure to ultraviolet (UV) radiation in the UV-A range. Furocoumarins are changed temporarily into a high-energy state when they absorb photons. They then release this energy into the skin where it causes damage to DNA in the epidermis, causing necrosis. Perspiration, wet skin, and high humidity increase the intensity of phototoxic reactions by increasing the skin's absorption of the furocoumarin.
Phototoxicity causes severe reddening and varying degrees of blistering. In Alaska, this rash is often called “pushkie burns.” Most clinical changes occur within 24– 72 hours of exposure, but contaminated areas may remain photoreactive for a few months to many years and may produce permanent scarring. As little as 1 mg of furocoumarin per square centimeter of skin may cause blisters after an exposure to less than 10 minutes of summer sunlight.

In case of a suspected phototoxic burn, stop contact with any plants suspected of being phototoxic and avoid sun exposure. Wash the exposed area thoroughly with water and a mild soap. Do not use bleach. For mild reactions, cool wet dressings, topical steroids, antihistamines, and nonsteroidal anti-inflammatories should suffice. Severe reactions may require high-dose systemic steroids. Consider topical 4% hydroquinone cream once to twice daily for several weeks to lessen hyperpigmentation. After recovery, topical sunscreens should be applied to affected skin surfaces when extended exposure to sunlight is expected.
2.
Beauty with a bite: Apicaceae (Umbelliferae), the carrot family.
Regulatory Horticulture. 1999; 25: 10-13