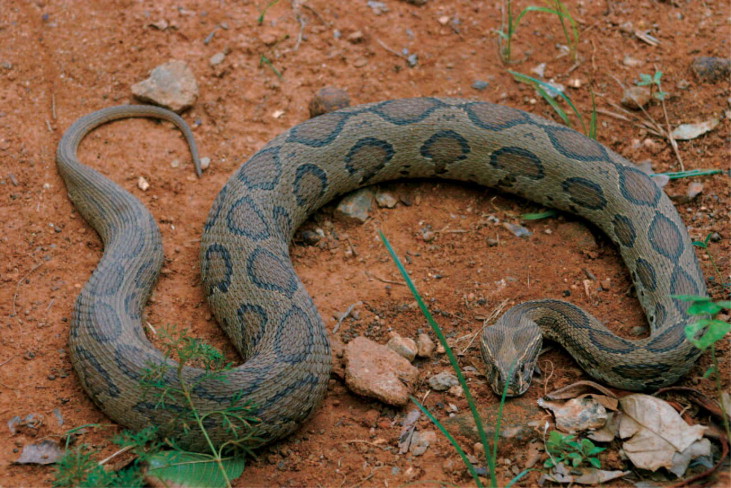 Snakes of Medical Importance in India: Is the Concept of the “Big 4” Still Relevant and Useful?

DOI:https://doi.org/10.1580/06-WEME-CO-023R1.1
Snakes of Medical Importance in India: Is the Concept of the “Big 4” Still Relevant and Useful?
Previous ArticleAs If You Needed Another Reason to Read Wilderness and Environmental Medicine!
Next ArticleThe Perception of Risk and Risk Taking Behavior: Implications for Incident Prevention Strategies

Snakebites continue to be a major medical concern in India. However, there is very little hard evidence of a numerical nature to enable us to understand which species are responsible for mortality and morbidity. For many decades, the concept of the “Big 4” Snakes of Medical Importance has reflected the view that 4 species are responsible for Indian snakebite mortality—the Indian cobra (Naja naja), the common krait (Bungarus caeruleus), the Russell's viper (Daboia russelii) and the saw-scaled viper (Echis carinatus). However, a recent discovery that another species, the hump-nosed pit viper (Hypnale hypnale), is capable of causing lethal envenomation, and that this problem was being concealed by systematic misidentification of this species as the saw-scaled viper, has necessitated a review of the concept of the “Big 4.” The concept of the “Big 4” snakes is reviewed to demonstrate its failure to include all currently known snakes of medical significance in India, and its negative effects related to clinical management of snakebite. The emergence of the hump-nosed pit viper (Hypnale hypnale) as a snake of medical significance has rendered the “Big 4” obsolete in terms of completeness. The concept of the “Big 4” is restricting sound epidemiological work and the development of effective snake antivenoms. It should be replaced by the model introduced in the 1980s by the World Health Organization, which has not received adequate circulation and implementation.

Venomous snakebite continues to be a matter of major medical concern in India, as it has been for at least the last 100 years. In the 1950s, a World Health Organization (WHO) survey estimated the number of bites at 200,000 in India alone with a mortality of 15,000 annually.
1.
Snakebite mortality in the world.
Bull WHO. 1954; 10: 35-76
In the late 20th century, the number was estimated at 1.2–2.4 deaths per 100,000, which would equate to a mortality level of 25,000 per annum.
2.
Snake-bites: Appraisal of the global situation.
Bull WHO. 1998; 76: 515-524
More recent WHO estimates state that the annual mortality due to snakebite in India is approximately 50,000.
3.
WHO/SEARO guidelines for the clinical management of snakebite in the Southeast Asian region.
SE Asian J Trop Med Pub Hlth. 1999; 30: 1-85
There are many causal factors that contribute to this mortality rate. There also remain a great many important, yet unanswered, questions relating to the treatment of snakebite victims. These questions include the correct dosage level of antivenom to be given to a victim with systemic envenomation upon arrival at hospital, the precise nature of snake venoms, including their content and variability, and the lack of reliable means of identifying species of snakes responsible for bites, such as an enzyme-linked immuno sorbent assay (ELISA).
4.
Mico-ELISA for detecting and assaying snake venom and venom-antibody.
Lancet. 1977; 2: 639-641
Much of the information regarding Indian venomous snakes, on which we currently base decisions, has been known for many decades, particularly in respect to the number and geographical ranges of snake species, population densities, and snake habits.
5.
The fauna of British India Ceylon and Burma including the whole of the Indo-Chinese sub-region.
Reptilia and Amphibia Vol. III—Serpentes. Taylor and Francis, London1943
This knowledge has now become accepted wisdom in the field of snakebite and snakebite treatment. There has, however, been very little qualitative herpetological work in India, since the 1940s.

One of the widely accepted concepts in Indian snake venom discussions and research is the notion of the so-called “Big 4 Snakes of Medical Importance,” which includes the Russell's viper (Daboia russelii), the saw-scaled viper (Echis carinatus), the Indian or spectacled cobra (Naja naja), and the common krait (Bungarus caeruleus) (Figure 1, Figure 2, Figure 3, Figure 4). These 4 snakes have been believed to cause the vast majority, if not all, fatalities due to snakebite. It was recognised that species such as the king cobra (Ophiophagus hannah) were capable of causing lethal envenoming, but the number of bites and human contact with these other dangerously toxic species ensured that the number of fatalities each year was relatively negligible.
This paper examines the usefulness of the concept of the “Big 4” in light of recent discoveries that other snakes are capable of causing life-threatening envenoming in a significant number of cases. Whether the concept of the “Big Four” is still useful or whether this concept actually causes problems in epidemiology and snake identification is reviewed. Whilst we have largely abandoned antiquated methods of snakebite therapy such as the use of permanganate of potash, chloride of gold, silver nitrate, and the chloride and hypochloride of lime,
6.
The Poisonous Terrestrial Snakes.
Asiatic Publishing House, Delhi2000
other concepts from that same period, such as the “Big 4,” have remained unexamined.

The recent recognition of a snake in India, previously considered essentially harmless, as a species capable of causing life-threatening envenoming brings the value of the concept of the “Big 4” into question. A study in Kerala, India, has established that out of 44 snakes killed and brought to 2 hospitals by snakebite victims from 2000 to 2004, 9 proved to be the hump-nosed pit viper (Hypnale hypnale) (Figure 5).
7.

All 9 of these snakes were misidentified by the treating physicians as saw-scaled vipers (E carinatus). This misidentification resulted from the belief that, as the victim was suffering from severe life-threatening envenoming, the offending snake had to be one of the “Big 4” snakes of medical significance. Combining 2 of these cases in which detailed clinical records were available with 3 other subsequently documented H hypnale bites from 2005 revealed the results found in Table 1.
7.

Of these, 8 (9.1%) were proven bites from H hypnale, with the dead snake being brought to the hospital. In another 7 (8%), the victim or bystanders identified H hypnale from a selection of photographs of both venomous and nonvenomous species from the surrounding area. The percentage of bites resulting from H hypnale but not supported by the dead snake or a positive identification by the victim is unknown. Before the study, however, all of these bites would have been recorded as bites by the saw-scaled viper (E carinatus).
The role of Indian polyvalent antivenom (AV) (an equine product made with N naja, B caeruleus, D russelii, and E carinatus venoms) was evaluated for effectiveness in dealing with bites of H hypnale. The primary criteria for success was restoration of coagulation as measured by the 20-Minute Whole Blood Clotting Test (20 WBCT).
8.
Poisoning by bites of the saw-scaled or carpet viper (Echis carinatus) in Nigeria.
Quart J Med. 1977; 46: 33-62
In the cases of coagulopathy caused by the other local vipers, Russell's viper (D russelii) and the saw-scaled viper (E carinatus), coagulation is normally restored within 18 hours of starting AV. AV is administered at 6-hour intervals, with the victim receiving up to 30 vials in a 12 hour period (ie, 10 vials at T0, 10 vials at T0 + 6 hours, and 10 vials at T0 + 12 hours). The final blood test to establish coagulation is taken at T0 + 18 hours. In the Kerala study 4/5 (90%) of H hypnale cases remained coagulopathic for more than 18 hours despite AV administration,
7.

indicating a failure of Indian polyvalent AV to reverse coagulopathic effects of H hypnale venom.
This conclusion is further supported by evidence from Sri Lanka,
10.
Efficacy of antivenom in the treatment of severe local envenomation by the hump nosed viper (Hypnale hypnale).
Am J Trop Med Hyg. 1995; 53: 260-262
,
11.
Excessive fibrinolysis: The coagulopathy following Merrem's hump-nosed viper (Hypnale hypnale) bites.
Am J Trop Med Hyg. 1995; 53: 260-262
which showed that Indian antivenom, the only antivenom available in that country, had very little efficacy in dealing with symptoms of severe local or systemic envenoming by H hypnale. In light of these observations, it is clear that current Indian polyvalent antivenoms have no efficacy against the hump-nosed pit viper, and their use for these bites merely adds risk of allergic sequela, incurs considerable additional cost for terribly indigent victims, and wastes precious resources.
As a result of the failure of antivenom to restore coagulation, a management protocol has been developed at Little Flower Hospital, whereby antivenom is withheld in proven hump-nosed pit viper bites with systemic envenoming. Treatment consists of conservative management with particular emphasis on monitoring and supporting the indicators of renal performance, such as urine output, and serum creatinine and potassium. We are currently studying the effectiveness of this approach.
Based on our experience, we have prepared a table (Table 2) outlining the major groups of common clinical findings and responses to treatments encountered during snakebite management in Kerala. The findings related to H hypnale are tabulated alongside those of other snakes of medical significance.
Table 2Syndromic picture of venomous snakebite in Kerala, India

If we are to abandon the concept of the “Big 4,” we need to substitute a more useful classification scheme for the medically important venomous snakes of India. The WHO developed the following methodology in 1981 for the identification of snakes of medical significance:
20.

Progress in the characterization of venoms and standardization of antivenoms W.H.O. Offset Publ. 1981;58:1–44.

This methodology is considerably more valuable than the concept of the “Big 4,” particularly in light of the fact that hard, numerical, epidemiological data are not available in India. The WHO mortality figure of 50,000 is itself only an estimate. The numerical contribution of each particular species to these mortality figures is unknown. Therefore, a methodology such as the WHO definition, which provides the ability to assess medical significance without the reliance on specific numbers, is a more useful tool for doctors and medical professionals.
The following are listed by WHO as Indian Snakes of Medical Importance:
20.

Progress in the characterization of venoms and standardization of antivenoms W.H.O. Offset Publ. 1981;58:1–44.

However, on the basis of the WHO definition, we can see that the hump-nosed pit viper satisfies the criteria for joining the list as a class II member, in that it causes both life-threatening symptoms and necrosis.
When the concept of the “Big 4” snakes of medical importance was developed, it was undoubtedly useful in focusing attention on these 4 species as causes of significant mortality and morbidity in India. However, the recognition of the hump-nosed pit viper as a snake of medical significance, particularly in light of the confusion between this species and the saw-scaled viper, demonstrates the inadequacy of the “Big 4” concept in the current environment. The WHO criteria for listing snakes of medical importance is a much more practical tool as it allows for the possibility that other snakes may yet emerge, following sound epidemiological work, as being medically important.
Hospitals are a rich source of epidemiological data in respect to snakebite.
21.
A national hospital based survey of snakes responsible for bites in Thailand.
Trans R Soc Trop Med Hyg. 1992; 86: 100-106
A significant number of dead species are brought to hospital by the victims, and it is essential that these specimens be preserved in formalin and properly identified by a qualified herpetologist. This will provide sound epidemiological data and positively identify which species are causing morbidity and mortality in a given area. This is a high priority as it directly impacts patient care. If there are species that are currently regarded as harmless, yet are causing morbidity and mortality, it is essential that this be established and that effective antivenoms are developed in order to reduce morbidity and save lives.

☆No grants were received in connection with this paper.