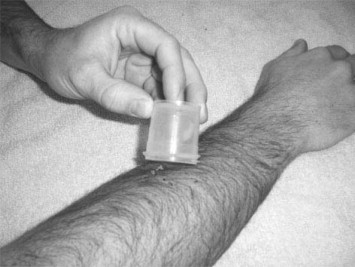 DOI:https://doi.org/10.1580/1080-6032(2006)17[21:TOIFAS]2.0.CO;2
Treatment of Imported Fire Ant Stings With Mitigator Sting and Bite Treatment—A Randomized Control Study
Previous ArticleColiform Bacteria in Sierra Nevada Wilderness Lakes and Streams: What Is the Impact of Backpackers, Pack Animals, and Cattle?
Next ArticleProblems and Complications With Cold-Water Rescue

To evaluate the efficacy of the commercially available product Mitigator Sting and Bite Treatment in reducing the pain after imported fire ant stings.

Twenty-four volunteer subjects were exposed to imported fire ant stings on both forearms. The subjects received Mitigator paste on 1 arm and calamine lotion on the opposite arm, in a blinded manner, from 90 seconds to 10 minutes after exposure. Subjects recorded pain on a 100-mm visual analog scale 60 seconds, 20 minutes, and 3 days after exposure. A 2-tailed paired t test was used to compare the difference in reduction of pain over time between the Mitigator-treated arms and the calamine-treated arms.

There was no significant difference in pain relief between calamine and Mitigator for imported fire ant stings.

Imported fire ants (IFAs) are widely distributed across the south-central and southeastern United States, having been introduced from their native habitat in sub-Amazonian South America many decades ago. By far, the most common and widely distributed species is Solenopsis invicta, the red IFA. In recent years, red IFAs have also been discovered in New Mexico, in California, and on many Caribbean islands, as well as in Australia and New Zealand.
1.
Potential global range expansion of the invasive fire ant, Solenopsis invicta.
Biol Invasions. 2004; 6: 183-191
It is estimated that IFAs sting more than 1 million people in the United States annually, and tens of thousands of people will seek medical treatment for allergic and infectious complications related to these stings.
2.
Fire ants: a continuing community health threat in South Carolina.
J S C Med Assoc. 1999; 95: 231-235
The severity of the stings can range from mild, local pustule formation to rare cases of anaphylaxis in predisposed individuals.
3.
Imported fire ant immunotherapy: effectiveness of whole body extracts.
J Allergy Clin Immunol. 1992; 90: 210-215
,
4.
Fire ants represent an important risk for anaphylaxis among residents of an endemic region.
J Allergy Clin Imunol. 2003; 111: 1274-1277
Development of a local inflammatory response is typical and may result in temporary debilitation. In the wilderness, allergic or infectious complications may create a potentially life-threatening situation.
Efforts to diminish the duration and severity of symptoms once a person has been stung have not yielded positive results.
5.
Meat tenderizer in the acute treatment of imported fire ant stings.
J Am Acad Dermatol. 1987; 16: 1189-1192
,
6.
Topical aluminum sulfate for fire ant stings.
Int J Dermatol. 1984; 23: 211
,
7.
Treatment of local skin response to imported fire ant sting.
South Med J. 1981; 74: 1361-1364
Mitigator Sting and Bite Treatment (American Natural Technology Sciences, Rogers, AR) is a recently developed paste that targets the local inflammatory reaction associated with IFA stings. Mitigator is hypothesized to work by rendering the IFA venom ineffective, possibly by protein denaturation. Although anecdotal evidence of successful IFA treatment with Mitigator exists, no randomized trials have been conducted. This study was therefore designed to investigate the clinical benefit of Mitigator through comparison with a common standard therapy.

This study was designed as a randomized, single-blind comparison trial of IFA sting treatment with Mitigator vs calamine lotion purchased from a Walgreens store. Mitigator is considered safe and nontoxic when applied topically. The main ingredients are water, walnut shells, emulsifying wax NF, pentaerythrityl tetracappryate, isopropyl palmitate, ceterearyl alcohol, polysorbate 60, sodium bicarbonate, papain, alcohol denatured, sodium hydroxide, methylparaben, propylparaben, and phenoxyethanol. At the time of this writing, Mitigator costs approximately $6 for 1 ounce of scrub in comparison with $2.79 for 6 ounces of calamine lotion. Institutional review board approval was obtained before study initiation, and written informed consent was obtained from all subjects.
Volunteer subjects were recruited by using publicly displayed bulletins. Individuals who expressed interest in the study were gathered at a single-day event. After hearing an explanation of the intent and design of the trial, those who were willing to participate were given a health-screening questionnaire. All female subjects were required to take a urine pregnancy test before participation. Subjects who met the following inclusion criteria were consented and enrolled: age 18 to 50 years with prior exposure to IFA stings, absence of a serious medical condition, absence of previous IFA stings or allergic reactions to insect bites or stings, absence of asthma or other reactive airway diseases, and absence of a known allergy to walnuts. In addition, those willing to participate had to ensure ability to attend a follow-up session 3 days later. Subjects who were pregnant or were regularly using oral corticosteroids, anti-inflammatory agents, or antihistamines were excluded.
Baseline VAS responses were recorded and statistical analysis was performed for the self-pairing study sample. A 2-tailed paired t test (parametric) and the Wilcoxon signed rank test (nonparametric) were used to compare differences in pain-score change from 60 seconds to 20 minutes and from 60 seconds to 3 days for grouped data of the Mitigator- and calamine-treated arms. By using 13 mm as the statistically significant difference in change of pain over time between groups, with a power of 80% and a 2-tailed alpha of 0.05, we determined that a minimum of 21 subjects would be needed. We also used a random-effects repeated-measures analysis of variance and found similar results as with the paired t test (results not reported).

Mitigator was placed on the left arm in 8 subjects and on the right arm in 16 subjects, with calamine lotion applied to the opposite respective arm in each individual. There were no systemic reactions to IFA stings or adverse reactions to treatment. Within-group baseline VAS scores (Table 1) were generally similar, with the exception of subject No. 13. There were no significant between-group differences in mean VAS scores at baseline, 60 seconds, or 3 days (Table 2). Mean change in VAS scores over time was statistically equivalent between groups (Table 3). Only 3 of the subjects described the use of any at-home therapy between day 1 and their follow-up visit: 2 subjects used oral diphenhydramine and 1 subject used oral aspirin and topical 1% hydrocortisone cream on both arms. Subject No. 9 sought medical care for her IFA stings, which had resulted in bilateral arm hives when she went to work at a local hospital 1 hour after her participation. She was treated with diphenhydramine orally and a 5-day prescription for prednisone. She had no complications at her 3-day follow-up visit.
Table 1Perceived pain (in millimeters) by individual subjects on the visual analog scale
Table 2Mean perceived pain (in millimeters) by each subject as recorded on the visual analog scale
Table 3Mitigator vs calamine lotion mean decrease in pain (in millimeters) from the visual analog scale

Although fewer than 20% of those who seek medical attention for IFA envenomation (1% of all who receive IFA stings) will require an intervention such as treatment of local infection or systemic reaction,
8.
Frequency of fire ant stinging in Lowndes County, Georgia.
J Med Assoc Ga. 1978; 67: 101-102
,
9.
Incidence of stings or bites of the red imported fire ant (Hymenoptera: Formicidae) and other arthropods among patients at Ft. Stewart, Georgia, USA.
J Med Entomol. 1982; 19: 366-370
identification of effective treatment for IFA stings is important. Venom from IFAs is composed of a mixture of allergens and alkaloids, which shares some similarities to other Hymenoptera species.
3.
Imported fire ant immunotherapy: effectiveness of whole body extracts.
J Allergy Clin Immunol. 1992; 90: 210-215
,
10.
Hypersensitivity to fire and venom.
Ann Allergy Asthma Immunol. 1996; 77: 87-97
,
11.
North American arthropod envenomation and parasitism.
in: Auerbach P.S. Wilderness Medicine. 4th ed. Mosby, St Louis, Mo2001: 863-887
The humoral responses invoked by the envenomation include neurogenic inflammation and cytokine cascade initiation as well as the generation of humoral antibodies.
11.
North American arthropod envenomation and parasitism.
in: Auerbach P.S. Wilderness Medicine. 4th ed. Mosby, St Louis, Mo2001: 863-887
,
12.
Hymenoptera hypersensitivity in an imported fire ant endemic area.
Ann Allergy Asthma Immunol. 1997; 78: 369-372
Adverse local reactions may occur as a result, and there have been several case reports of IgE-mediated anaphylaxis.
4.
Fire ants represent an important risk for anaphylaxis among residents of an endemic region.
J Allergy Clin Imunol. 2003; 111: 1274-1277
,
10.
Hypersensitivity to fire and venom.
Ann Allergy Asthma Immunol. 1996; 77: 87-97
Immunotherapy has emerged as a potential therapy for people with severe allergic reactions, but no advances have been made regarding treatment of local pain and inflammation. Multiple cellular processes are involved in the pain response, and once initiated, pharmacotherapeutic intervention is difficult. Although prophylactic treatment may effectively block similar processes, as demonstrated in a recent trial involving Chrysaora fuscescens and Chiropsalmus quadrumanus (jellyfish) envenomations,
13.
Efficacy of a jellyfish sting inhibitor in preventing jellyfish stings in normal volunteers.
Wilderness Environ Med. 2004; 15: 102-108
this is not a practical approach for IFA stings, as exposure is rarely anticipated. Consequently, interventions directed at minimizing pain are needed.
Available data on the treatment of IFA envenomations are limited, and the manner of appropriate management is uncertain. We believe this study is the first to address the treatment of IFA stings through a randomized clinical trial. We chose to investigate a commercially available product (Mitigator) in an attempt to substantiate subjective reports of its efficacy. However, we were unable to demonstrate any statistical difference in relief of pain when Mitigator was compared with a standardized regimen with calamine treatment, and the situation remains unresolved.
There may be multiple etiologies for the lack of statistically significant differences in this study. Although our study population was small, the number needed to show a clinical difference on our VAS was sufficient. In a study of this type, one would expect a curvilinear decrease in pain, with the greatest difference in treatment effect initially. Although there was a “trend” toward a decrease in the Mitigator-treated arm at 20 minutes, the difference was not significant. We acknowledge that subject No. 13 in our study had a wide variability in pain at onset between the calamine- and Mitigator-treated arms. However, excluding this subject from the database and recalculating the data still failed to demonstrate a significant difference between the 2 treatments. Among the multiple possible reasons for this is the inability of the clinical setting to adequately reproduce the natural environment. As those who have been stung will recall, IFAs frequently “attack” in unison, and a person may easily receive 10 to 20 stings before the ants can be removed. Although approximately 10 ants were present in each container in this study, many subjects experienced just 2 or 3 stings. Furthermore, it is likely that the ants expended their venom during the collection process and therefore may have had less venom available during the study than in the natural environment. This may have led to decreased initial pain in the study population, thus decreasing the apparent treatment effect. Because the initial pain described by the subjects was low, demonstration of therapeutic benefit from Mitigator, if it exists, may require more volunteers than this study enrolled. Future studies may benefit from attempts to increase initial pain levels either by increasing the total number of stings or by “resting” the IFAs for a number of days to ensure that high levels of venom are present in the study ants.

There was no demonstrable difference in immediate or delayed pain relief between Mitigator and calamine lotion therapy for IFA stings. These envenomations remain a source of potential morbidity, and further investigation into appropriate treatment is needed.

We thank the Brooke Army Medical Center Institutional Review Board for reviewing and approving this study. Mitigator Sting and Bite Treatment was provided upon request for this study by Mr Pat Kennedy and American Natural Technology Sciences, Rogers, AR; however, no financial relationship exists between the investigators and the manufacturer or distributors of Mitigator Sting and Bite Treatment.

☆This abstract was presented at the annual conference of the Society for Academic Emergency Medicine, May 22 to 25, 2005, in New York, NY.

☆☆There was no funding in the production of the above manuscript. Mitigator product was provided courtesy of Mr Pat Kennedy of www.mitigator.net. We are not aware of any conflicts of interest.